Kansas City Chiefs star Laurent Duvernay-Tardif says that he will sit out the upcoming NFL season to contribute to the treatment of people suffering from Covid-19, forgoing millions of dollars of his salary in the process. 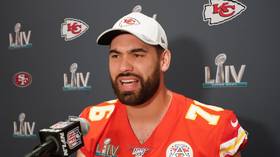 Duvernay-Tardif, who was the starting guard for the Chiefs in their 31-20 victory against the San Francisco 49ers at Super Bowl LIV in February, becomes the first player to opt out of the 2020-21 season due to begin in September amid the ongoing concerns surrounding player safety throughout coronavirus pandemic.

Instead, Duvernay-Tardif – who is the only medical school graduate in the NFL – announced that he will spend the next year assisting in the treatment of people suffering from Covid-19 and its associated health risks.

A debate currently exists within the NFL as to how to best proceed with the forthcoming season, with the league and its players’ union striking a deal late on Friday covering the specifics of how and when training camps can begin, as well as agreeing financial terms for a season that theoretically could be impacted by future restrictions designed to mitigate the spread of the virus in a country which has seen more than 60,000 diagnoses for several consecutive days.

My decision regarding the 2020 NFL season #nfl #covid_19 #chiefs #kansascity

“This is one of the most difficult decisions I have had to make in my life but I must follow my convictions and do what I believe is right for me personally,” Duvernay-Tardif wrote in a statement.

“Being at the frontline during this offseason has given me a different perspective on the pandemic and the stress it puts on individuals and our healthcare system. I cannot allow myself to potentially transmit the virus in our communities simply to play the sport that I love. If I am to take risks, I will do it caring for patients.”

His decision to sit out the season will still net him a salary of $150,000 for the year, but that is a figure far removed from the reported average of $8,472,600 he usually commands.

Duvernay-Tardif’s stance makes him the latest celebrated athlete in the United States to express his concerns as to competing in the midst of the pandemic, and follows similar statements from the likes of San Francisco Giants catcher Buster Posey, DeAndre Jordan of the Brooklyn Nets and Los Angeles FC star forward Carlos Vela.