After cleaning out two divisions, there is seemingly little left for Amanda Nunes to conquer in the UFC. Now, in a TV interview in her Brazilian homeland, she has hinted at possible retirement. 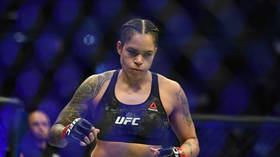 Probed regarding her future when appearing via video link on the Esporte Espetacular program broadcast by media giant Globo, the UFC women’s bantamweight and featherweight queen spoke of having little left to achieve while also longing to spend more time in her homeland.

“I’m getting old,” Nunes laughed. “I’ve achieved everything I wanted to. In fact, there’s nothing to do now in the [weight]categories.

“The UFC will put some fights on, [and]the girls will have to battle to get to the top to be able to fight with me. But I’m really thinking [about retiring from MMA],” admitted ‘The Lioness’.

“I’m going to talk to Conan [Silveira] and Dan [Lambert], but I’m fine, you know? I’m fine to fight, to retire. We’ll see. I’m already arriving at that moment when I want to enjoy [life]a little more.

“When I travel to Brazil, I have to travel counting [the days]to when I have to go back [to the US]. I want to be able to go and rest, and not have to worry about having to return.

“Having to return here [to Florida], I know I have to, but it doesn’t have to be under pressure, right?,” Nunes asked rhetorically.

But that doesn’t mean that were she to step away from the octagon, the 32-year-old would abandon the sport altogether, however.

“I can go on with my life,” Nunes continued. “Maybe [I can enter] a new stage, finding new talents, helping some girls, and maybe being a coach too. I think I can help girls and boys a lot as well, but for sure the focus will be more on helping girls to achieve their goals.”

“I believe I can help a lot, because I know what is going on in the fighter’s head, especially the women [fighters],” she concluded.

In her most recent fight, Nunes dominated durable Canadian challenger Felicia Spencer across five rounds in their featherweight main event at UFC 250.

The unanimous decision victory improved Nunes’ record to 20-4 overall, and extended her unbeaten streak to 11 bouts spanning half a decade.

Pondering potential challengers for Nunes after her dominance over Spencer, UFC boss Dana White said a potential showdown with PFL lightweight champion Kayla Harrison could be an “interesting” prospect.

Harrison is a double Olympic judo gold medalist, and is 5-0 since stepping into the professional MMA rankings.

One thing which could see Nunes take time away from the cage is the impending arrival of her daughter with partner Nina Ansaroff.

Fellow MMA fighter Ansaroff is due to give birth to the couple’s baby sometime in September.