National Football League Hall of Famer Mike Ditka has gone fully un-woke on the issue of players kneeling during the national anthem before games to protest police brutality, saying the practice is unpatriotic and disrespectful. 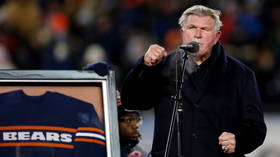 “If you can’t respect our national anthem, get the hell out of the country,” Ditka said in an interview posted on Sunday by TMZ Sports. “That’s the way I feel. Of course, I’m old fashioned, so I’m only going to say what I feel.”

Ditka, 80, said he prefers that such demonstrations not be allowed in the X League, a new women’s tackle football organization of which he is chairman.

Such comments might not have raised eyebrows a year or two ago. Ditka himself said in 2017 that he would bench a player who wouldn’t stand for the anthem, claiming that “there has been no oppression in the last 100 years that I know of.” But in the era of anti-racism protests that sprung up across the nation since black Minneapolis man George Floyd was killed while in police custody on May 25, opposition to anthem protests has become more controversial.

New Orleans Saints quarterback Drew Brees issued multiple apologies in June, after his comments suggesting that kneeling during the anthem is disrespectful to the American flag triggered blowback from NFL players and pundits. Proponents of the demonstrations have argued that kneeling has nothing to do with the anthem or flag and is meant to raise awareness of police brutality. But regardless of intent, their actions are still seen as disrespectful by many.

Legendary NFL coach Mike Ditka just said this in an interview:“If you can’t respect our National Anthem, get the hell out of the country.”AMEN!

Conservatives on Twitter praised Ditka with such comments as “God bless you, coach,” and “Thank you, Mike, for taking a stand for our great America. It is disgraceful what is happening.”

But Ditka was getting plenty of pushback, too. Sportswriter Bob Garcia IV said the former coach “lost major respect from NFL fans for radical anthem stance.” Ditka’s comments underline the fact that the US “remains a country beset with racial tension and inequality,” he added.

Dear Mike Ditka: I’m a US Marine who served this Nation with his life. Yet I’ve NEVER felt it my place to tell anyone to “get the hell out of the country.” Let that sink in.PS: Athletes kneel to raise awareness for racial injustice. And you’re exactly one of the reasons why. https://t.co/FEibCZsrwE

Ditka rose to fame as a player and as the fiery coach of the Chicago Bears. He won Super Bowl rings as a player and later as an assistant coach for the Dallas Cowboys, and he led the Bears to their Super Bowl victory in 1985. He began his career as an NFL broadcaster after leaving the Bears in 1992 and returned to broadcasting after being fired as coach of the New Orleans Saints in 1999.