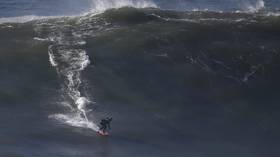 The jaw-dropping attempt took place in February at the inaugural WSL Nazare Tow Surfing Challenge event in Portugal, but was officially recognized by the Guinness World Records after a scrupulous measurement of the wave was conducted.

Scientific teams from the University of Southern California, WaveCo Science Team, and Scripps Institution of Oceanography reviewed the footage of Gabeira’s ride to calculate the height of the mammoth swell.

“The wave was pretty special although it was terrifying as well!” the surfer said.

The Brazilian star not only broke the women’s record, she was also named the winner of the XXL Biggest Wave Award for the largest wave ridden by any surfer in 2020.

“This world record really strikes me as quite amazing because the size of the wave was taller than the men’s size this year,” Gabeira said.

“It means a woman actually rode the biggest wave of the year overall and that to me is crazy. I had dreamed of it years ago but not as something realistic because there was no representation for me to believe that it was possible,” she added.

In 2013, the surfer survived a frightening accident when she broke her leg and lost consciousness during her ride before being saved by fellow surfer Carlos Burle.