Lower-league Marbella have revealed an extraordinary plan for an 18,000-seater stadium that includes swimming pools attached to its levels and a commercial complex targeting visitors living luxury lifestyles on the Spanish coast. 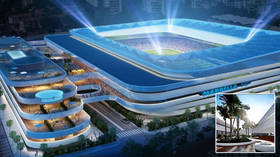 More than 4,000 square meters of land wll be dedicated to VIP areas in the swanky development at the popular tourist resort in Andalusia, where the club wants to include high-rise outdoor swimming pools and even ease the city’s parking problems by providing 2,000 parking spaces.

Marbella recently missed out on promotion to the second tier and currently play at the 7,300-capacity Estadio Municipal de Marbella, but the private backers of the plan have surprised fans around the world with their spectacularly ambitious vision for the club and are appealing for local residents to support the idea.

“We have been working on it for a long time,” said Oscar Ribot, of the group behind the project, which has used the tagline “dream of the impossible”.

“It is an idea that lives up to Marbella. Despite the fact that we are going through this unfortunate [pandemic]and the entire economy being damaged by this situation, we continue to work.”

Some fans voiced concerns on social media, warning that the development reminded them of Malaga’s debt problems and steady decline to the Segunda Division since they were taken over by Sheikh Abdullah ben Nasser Al Thani in 2010, who also had plans for a new stadium at one stage.

Others wondered whether the retractable roof, which is reminiscent of the redevelopment plans at Liga champions Real Madrid’s Bernabeu, was suitable for a club of Marbella’s current standing.

Supporters from outside of Spain were more excitable, wishing they could play Marbella away after the stadium was completed and calling the scale of the designs “class”.

I have seen a lot of stadium / training ground / academy project presentations over the years, many never happen. Good luck to Marbella FC, let’s hope they can build a sustainable future.

Where will they get the money from ?!?!?

Speaking alongside Ribot at an outdoor presentation on huge screens next to the luxury yachts of Puerto Banus, mayor Angeles Munoz asked municipal opposition groups and local institutions to back the stadium.

“It is a great project and speaks volumes about the seriousness of those who have presented it. Marbella has a great, serious project. Now begins the path that we must all travel together.

“A project of this nature carries a huge private investment and institutional support. The project is open to the public so that we all share it and feel it.

“The image of a football team says a lot about a city. Congratulations for continuing to think big.”