A TV station run by the owners of Inter Milan has shown an image of Lionel Messi on the largest church in Italy, with the club’s former president claiming that the striker’s father would walk to seal a transfer there for his son. 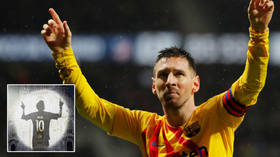 Italian giants Inter have been widely named as the most likely destination should Messi ever leave Barcelona in recent weeks, fueled by reports that the Argentina star’s father has bought a home in Milan.

PPTV, which is majority-owned by Inter chairman Steven Zhang, advertised an image of Messi with his arms aloft in a prayer-like pose on the front of the ancient building ahead of the club’s 2-0 win over Napoli in Serie A yesterday.

When he was asked about the projection in his post-match interview, Inter coach Antonio Conte admitted: “I didn’t see that.

“But it’s easier to move the cathedral than to bring Messi to Inter.”

Messi’s father and consultant, Jorge, is said to be keen to buy a house in the Porta Nova district of Milan, where the Gazzetta Dello Sport says the striker frequently visited between 2010 and 2014.

The 33-year-old has spent all 17 years of his senior career at Barcelona, becoming the all-time leading scorer at the club where he decided not to activate a clause allowing him to leave earlier this year.

He is only under contract until next summer and called off talks to extend his current deal following a high-profile row with the club during a domestic season of underachievement that saw Barca finish second in La Liga.

“It wasn’t my idea,” he said of the image on the 14th century cathedral.

“We are talking about an icon, a great player, a desire that everyone has.

“It’s fantasy football, a utopian situation. I believe that Messi sees his life and football future in Barcelona. I don’t see the slightest doubt about that.”