Mike Tyson has admitted he accepts the possibility of death in the ring and dismissed talk of health concerns over his veteran clash with Roy Jones Jr – although an organizer has revealed that the fight will be closely controlled. 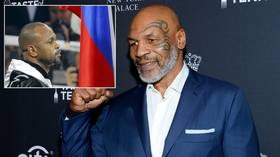 Tyson has ended months of speculation and clips of his menacing sparring sessions by confirming that fellow great Roy Jones Jr will provide his comeback opponent, warning that the idea of easing off from his renowned intensity and power is novel to him despite the exhibition fight being limited to eight rounds in California in September.

The former undisputed heavyweight champion, who is three years older than his 51-year-old rival, contradicted fight body the California State Athletic Commission by claiming that headgear was required for the scrap, only for commission executive director Andy Foster to state that neither fighter will be required to wear head protection and outline the restricted conditions the legends will be fighting under.

“I’m a neophyte in taking it easy,” an excited Tyson told ESPN, having been filmed smoking what appeared to be a joint while signing the fight contract.

“I don’t know how to do it that way. I am one speed: forward. I don’t know, Roy is just going to have to deal with that.

“I never took that many punches. I lived my life. I’ve been through some experiences and now I’m back.

“I feel that I took care of my body and state of mind better than most fighters that retired before me and came back.

“It’s going to be amazing. I’m looking forward to it.”

A partial revisiting of his glory years in the ring, when he claimed a string of world titles between 1986 and 1996, is clearly a motivator for Tyson, fighting under the umbrella of his Legends Only League that he hopes will encourage more icons dubbed “over the hill” to attempt comebacks.

“It’s just because I can do it, and I believe other people believe they can do it too,” he insisted.

“Just because I’m 54, it doesn’t mean I have to start a new career and our life is totally over.

“Not when you feel as beautiful as I do. I’m sure other people feel the same way.

“We’re there to show our skills and we’re fighting. This is what I learned in boxing when I was a young boy — when you sign that contract, there is an unwritten clause in there that you can die at any moment during training or fighting.”

Foster was more cautious. “They can move around and make some money,” he told BoxingScene, explaining that judges will not score the fight and neither man will win unless there is a knockout or they are deemed unfit to continue.

I am happy that this fight between me and Mike Tyson will happen! I was always ready and will be ready this time as well. I want all my fans to support me and tune in. Its gonna be epic🥊🥊🥊#miketyson #royjonesjr #bestfight #bestfighters @mercedesmusic18

Moscow-based Jones Jr posted a video of the pair signing their fight contracts in which Tyson, who runs a lucrative cannabis empire, had a long rolled-up cigarette in his mouth.

Jones Jr is less of a stranger to fighting given that he won a cruiserweight title in 2018, 13 years after the second of two unsuccessful comeback attempts by Tyson ended in him retiring midway through a fight with Kevin McBride.

Jones Jr has never officially retired, hitting his heavyweight peak in 2003, when he is said to have turned down a $40 million fight with Tyson after winning a version of the title.

He will now fight him on the Triller pay-per-view platform in an event that will also raise funds for charity and be preceded by a 10-part documentary series.

“We’re both accomplished fighters,” said Tyson. “We know how to take care of ourselves…we’ll be alright. Trust me.”