Romanian former Playboy stunner Anamaria Prodan has installed daughter and fellow model Rebecca to the board of Transylvanian football club Hermannstadt after splashing out on the team. 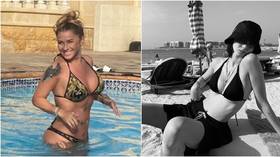 Prodan – who has modeled nude for the iconic men’s magazine – took over the Romanian Liga I team earlier this month.

“We now have a new breath, which gives the club extra value! We are happy to see Mrs. Anamaria Prodan Reghecampf as an investor in our project!” a statement read as Prodan was presented at the team’s Municipal stadium.

Prodan has embarked on a career as a football agent since leaving her modeling days, working with the likes of former Chelsea badboy Adrian Mutu and Nicolae Stanciu, whose $11 million move to Saudi Arabian side Al-Ahli Saudi FC Prodan she brokered last year.

A post shared by Anamaria Prodan Reghecampf (@anamariaprodanreghecampf) on May 5, 2020 at 10:42pm PDT

However, that role has reportedly led to a potential conflict interest as the new head honcho at Hermannstadt, leading to Prodan to install her daughter on the board and handing her effective control of the club in her place.

“It’s about us as a family,” the 21-year-old Rebecca Dumistrecu Prodan said. “We breathe football and sports in general.

“I join those who want to perform, those who love to see joy in the stadium and those who promote sports. Sibiu is a wonderful city, with wonderful people, who deserve a wonderful team.”

She didn’t waste time in wielding the axe, as among her first duties at the club saw her vote for the removal of Vasile Miriuta as the club’s head coach, with Spaniard Ruben Albes is expected to be appointed in his place.

The younger Prodan is said to be a student at the Marangoni Institute in Italy and has modelled for global brands like Dolce & Gabbana in the past.