Chelsea fans have implored Frank Lampard not to play goalkeeper Kepa Arrizabalaga, but the coach has defended the Spaniard and branded criticism of him as “unfair.” 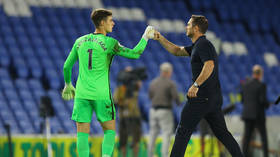 Blues supporters vented their frustration at the goalie after Chelsea posted a video on Instagram of summer signing Ben Chilwell scoring some impressive efforts past Kepa in training.

“Kepa, just get out,” wrote one fan bluntly. “Don’t dare to play Kepa or [Marcos] Alonso ever again in your life,” added another.

Plenty of other supporters joined in to make fun at the ‘keeper’s expense. One Instagram user quipped: “I don’t trust anyone’s shooting ability while Kepa is on the goal,” while another suggested “if it’s Kepa it doesn’t count.”

However, Lampard defended the 25-year-old ahead of the Blues’ Carabao Cup trip to Tottenham Hotspur on Tuesday.

After a calamitous error in Chelsea’s 2-0 defeat to Liverpool earlier in September, Kepa was benched for their 3-3 draw with West Bromwich Albion last Saturday.

READ MORE: Lampard says big-spending Chelsea ‘will improve’ – and they will have to, fast, after latest defensive horror show at West Brom

Asked if he had played his final game in a Chelsea shirt, Lampard said: “No, I won’t go to that point. It’s been a hard time for him. Kepa is a young man and a lot of the spotlight has been unfair.”

However, he would not confirm if new signing Edouard Mendy would start ahead of him between the sticks on Tuesday: “Mendy and Chilwell are in the squad tomorrow. They are fit and we will see if they start or not.”

Fans took to Twitter to react to his comments.

“Please for the sake of our club play Mendy from now on,” one fan begged. At the possibility of Kepa having played his final game for the Blues, another simply said “hopefully.”

Others found Lampard’s defense of the under-fire stopper amusing.

“Unfair” it’s funny when he defends him 😂

Chelsea splashed a world-record £71.6 million ($92.5 million) fee to prise Kepa away from Athletic Bilbao in 2018, but he has failed to convince during his time at Stamford Bridge.

The Spain international kept 23 clean sheets in a fairly promising debut campaign under Maurizio Sarri, but throughout Lampard’s time at the club he has increasingly looked like a liability and developed a penchant for making costly errors.

Falling 3-0 down to West Brom on Saturday was a reminder that Kepa has been done no favors by the shaky defense in front of him, but if new arrival Mendy starts and impresses against Tottenham he’ll find it very difficult to get back in the side.