Clippers guard Lou Williams has fallen foul of the NBA authorities after a photograph emerged of him inside of a strip club this week after he was given permission to leave the NBA’s quarantine bubble to attend a funeral. 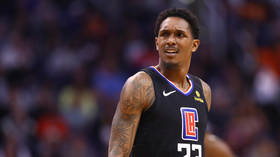 Williams was granted leave from the team’s training base at Disneyland in Florida ahead of the resumption of the NBA season at the end of this month to attend the funeral service but soon after photographs emerged on social media of him present at a gentleman’s club in Atalanta.

The photograph was uploaded by rapper Jack Harlow late on Thursday night and was swiftly deleted, but not before it was reproduced by social media users. Harlow then attempted to quell the situation by maintaining that the photograph he posted was an old one and that he was simply remembering fond memories of his friend. The explanation was also deleted soon after it was posted.

Confronted with the mounting evidence, Williams reportedly informed NBA security that he was, in fact, present at the club – but that he was only there briefly to pick up a meal he had ordered.

Clippers’ Lou Williams will have 10-day quarantine on Orlando campus after picking up food at Magic City on excused absence — sidelining him through first two seeding games — NBA says.

Lou Williams was partying with Jack Harlow last night, after being excused to leave the NBA bubble Jack Harlow posted them partying together on his Instagram story. A post which Jack quickly deleted. Probably at Lou’s instruction @WorldWideWobpic.twitter.com/DOZDhdDRYn

The NBA have arranged temporary rules governing players’ conduct within the bubble, and mandate four-day quarantine periods for players granted leave as Williams was. However, they are obliged to return negative Covid-19 tests for each day they are out of the bubble and are told to not visit somewhere which may be deemed as ‘high risk’.

Williams – who did take coronavirus tests outside the bubble – will now face the reality of being barred from team activities for a period of 10 days, during which time he would be confined to a hotel room. This will almost certainly rule him out of the Clippers’ opening game of the resumed season against the Los Angeles Lakers on July 30.

Several players have spoken about the difficulty of living within the NBA bubble, with the two NBA finalists expected to remains inside of it for a period of around three months.

“The hardest adjustment probably is just not being able to do what you want to do,” Lakers center JaVale McGee told the LA Times this week.

“It’s sort of like being in college and being in a dorm and going to eat food that they prepare for you. It’s just different for a long-spanning time; it’s like a three-month road trip. So it’s definitely different. But it’s not that bad.”