Days after defensive partner Harry Maguire was arrested following an alleged close-season fracas, Sweden star Victor Lindelof has reportedly been fighting crime by chasing down a thief who tried to steal a 90-year-old woman’s bag. 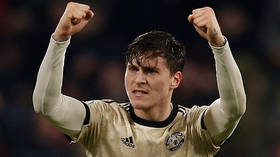 The United regular reportedly set off in pursuit of a man on a bicycle after seeing him snatch a handbag from the pensioner’s basket in his home city of Vasteras, where he had been taking a short break as part of a brief respite from football before the new season starts next month.

Sportbladet named Lindelof as the hero of the hour, catching and detaining the suspected robber until police arrived in an incident said to have been witnessed by the Premier League star’s wife, Maja.

“The man who intervened…was athletically built – I cannot say more than that,” officer Daniel Wikdahl was initially quoted as saying.

A police spokesman then appeared to confirm the high-profile identity of the crime-fighter by adding: “Victor feels that he just did what anyone else would have done in that situation.

“The police want to take the opportunity and thank the witness for a quick and wise intervention to restore the plaintiff’s property.”

Fans who had responded to Maguire’s alleged altercation with jokes about the United captain’s lack of speed and footballing failings wasted little time in offering the same treatment to Lindelof.

“Couldn’t stop that cross from Jesus Navas and now trying to stop a thief,” rued one, lamenting United’s inability to prevent Luuk de Jong from scoring Sevilla’s semi-final winner that knocked United out of the Europa League earlier this month.

Couldn’t stop that cross from Jesus Navas and now trying to stop a thief pic.twitter.com/kXLw1tENpo

Lindelof one of the best defenders around when it’s along the ground, good job it wasn’t a floating handbag though!

“Good job it wasn’t a floating handbag,” added a skeptic. “Lindelof is one of the best defenders around when it’s along the ground.”

Revisiting an allegation that England defender Maguire had confronted a gangster in the build-up to his detainment, a supporter said: “Maguire beats up gangsters. Lindelof stops a thief.

“I want new players, not the freaking Avengers.”

Others likened Lindelof to Batman and produced memes suggesting that Maguire would be pained by his teammate taking the plaudits while he made the headlines for the wrong reasons.

At least he can defend better than Fridgeuire

United conceded the third-fewest goals in the Premier League behind champions Liverpool and second-placed Manchester City last season, but sections of the club’s support have clearly been unimpressed by their defending.

Maguire has not always met the high expectations that came with his $103 million transfer from Leicester last summer, and Lindelof is yet to win a trophy at Old Trafford, having arrived from Benfica for around $41 million in 2017.

The man allegedly stopped by Lindelof was released after reportedly being suspected of aggravated theft and minor drug offenses for his own use.