Inter Milan are reportedly considering a move for Lionel Messi next summer as the Argentine’s future remains the topic of intense debate following a disappointing domestic campaign and boardroom turmoil at the Catalan giants. 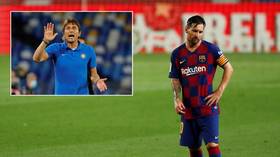 According to Italy’s Gazzetta Dello Sport, Inter’s Chinese majority shareholders, Suning Holdings Group, could plot a way to bring the 33-year-old star to the San Siro next season in what would be a sensational move similar to Juventus sealing the services of Cristiano Ronaldo from Real Madrid back in 2018.

Messi is under contract at Barcelona until the summer of 2021, but is yet to commit to talks to renew that deal with the club he has been at his entire professional career.

The six-time Ballon d’Or winner recently lashed out on the back of Barca’s disastrous end to this season’s campaign which saw them relinquish the La Liga title to Real Madrid, calling their performances “weak” and “erratic.”

Messi has also been involved in ugly public spats in recent months with sporting director Eric Abidal over the sacking of manager Ernesto Valverde, later criticizing the board over handling of wage cuts during the coronavirus-enforced break to the season.

Back in February, Barcelona bosses were forced to deny embarrassing accusations that they were behind a social media campaign to undermine the reputation of figures linked to the club, including Messi.

Further fueling speculation of a potential switch to Milan was the news this week that Messi’s father and agent Jorge will relocate his business to Milan next month.

The move is believed to be for tax purposes, but has done little to temper the speculation that Inter’s Chinese owners could make a big-money swoop for the star next summer.

Barcelona and Messi will aim to put their domestic disappointment behind them when they renew their Champions League campaign against Napoli in the last-16 second leg in Spain on August 8, with the game finely balanced at 1-1.

Beleaguered boss Quique Setien has insisted his team has what it takes to win a first European crown since 2015, although Messi has signaled that the team will need to improve dramatically on recent performances to stand any chance of what would be a fifth personal Champions League title.

Despite missing out on the league title, Messi still ended the la Liga season as top-scorer with 25 goals in 33 games, also making history by registering 22 assists.

He has since been pictured holidaying on a yacht in Ibiza with family and Barcelona teammate Luis Suarez as they rest before returning to training for the crucial clash with Napoli.

Inter Milan, meanwhile, will focus on finishing as high up the Serie A table as possible with three games remaining.

Antonio Conte’s team are currently third, two points behind Lazio and with a game in hand, but seven points behind champions-elect Juventus.

After that, Inter will turn their attentions to a Europa League last-16 second leg against Getafe in August.