A long-suffering fan has failed in his bid to make medical marijuana available to two sets of NFL supporters, seeing the idea dismissed by a state committee despite the dispiriting win ratio of the teams under consideration. 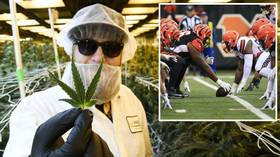 Vincent Morano submitted his pipe dream to the State Medical Board of Ohio in late December, arguing that fans of the Cleveland Browns and Cincinnati Bengals should be allowed to ease their hardships with marijuana prescriptions.

A look at the two teams’ records after the 2019 NFL season suggests the fan of 30 years has as much reason to feel pain this season as he has over much of the course of his lifetime.

The Bengals went 2-14 to finish dead last in the AFC North, just ahead of the lackluster Browns, who finished with a 6-10 record, despite great optimism ahead of their 2019 campaign.

Although the Browns fared better than the Bengals last season, the statistics over the last 10 years show that Cleveland are the least successful team in the NFL in terms of wins, with an overall record 42-117 over the past decade.

Morano’s petition, which specified making marijuana available to those diagnosed as being a “Browns/Bengals fan”, was one of 26 proposals, including petitions for common conditions such as anxiety and depression.

The state medical board was unconvinced by his conclusion that “there’s not a physician in Ohio that will disagree,” despite the Browns dismissing a succession of coaches and failing to record a win in 2017, as well as joining the Bengals as a team that has still to win a playoff game in the 21st century.

Speaking to The Enquirer, Morano argued: “People think sports do not affect people’s mental state, but they obviously do.

“We’ve been suffering for 30 years, all of us. Come Monday, everybody’s got the blues and that could ease their pain away.”

A long-time advocate of legalization, Morano admitted he was unsurprised that his idea was not one of the three carried forward by the board, adding on Twitter: “Next year!” as he vowed to fight the ruling in the future.