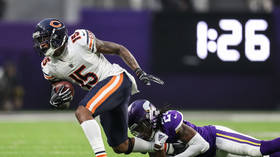 Bellamy was arrested in Florida on Thursday and charged with wire fraud, bank fraud, and conspiracy to commit wire and bank fraud. According to an indictment against him, the football star conspired with ten other defendants to file fraudulent loan applications for more than $24 million in forgivable Paycheck Protection Program (PPP) loans under the $2.2 trillion CARES Act.

The loans were intended to help small businesses pay their workers during the shutdown, but Bellamy apparently had other plans.

Bellamy drew down a loan of $1.2 million for his company, Drip Entertainment LLC, and allegedly purchased more than $104,000 in luxury goods with the cash, visiting Gucci, Dior, and Armani stores, and buying bling at jewelers. He also spent more than $64,000 at the Seminole Hard Rock Hotel and Casino, and withdrew over $302,000 in cash, per the indictment.

He also allegedly sought loans on behalf of his family and friends.

In total, the fraud ring prepared at least 90 applications, approximately 42 of which were approved and funded. $17.4 million was actually handed out, with alleged ringleader Phillip J. Augustin — a football talent manager — helping the conspirators with their dodgy paperwork in exchange for kickbacks from their loans.

Unlike most bank loans, the PPP loans can be completely forgiven — interest and all — if the business spends the proceeds on payroll, mortgages, rent or utilities within a designated period.

Since March, nearly $650 billion has been made available for PPP loans. Bellamy is not the only business owner to try to get a share of that fortune for free though.

In a memo last week, House Democrats warned that nearly $3 billion worth of these loan applications raised red flags when checked against a federal database. The Justice Department meanwhile has brought more than 40 cases involving false applications, while the Small Business Administration’s inspector general has launched “hundreds” of its own cases against alleged fraudsters, per a Politico report.

One man in Nevada pretended to pay his family and friends as ‘employees,’ submitted the paperwork, and used his loan to buy a house. Another man in Houston, Texas, invented a fake company and bought a Lamborghini and a Rolex watch, before spending “thousands” at strip clubs.

Despite the growing number of fraud cases, House Republicans have called the program a “resounding success,” and said the level of fraud that occurred was “minimal” compared to most government disaster relief programs.