Russian figure skating star Elizaveta Tuktamysheva has laughed off suggestions that she shares too many revealing snaps on social media, responding by posting a picture of herself wearing a high-necked fur dress. 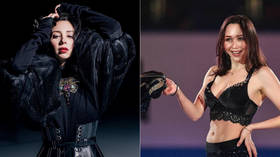 The 23-year-old, who has recently resumed training after a two-month break caused by the coronavirus pandemic, sarcastically reacted to negative comments regarding her “undressed photos” – saying that “there isn’t a single open centimeter” in the newly-posted picture.

“You have too many ‘undressed’ photos,” they said. Well, no. There isn’t a single open centimeter. I have even got hot,” the skater wrote.

In 2018 the extravagant skater launched the so-called “undressing trend” in figure skating after presenting her bombshell exhibition routine during which she took off her jacket, revealing a black bra underneath.

The provocative dance to Britney Spears hit “Toxic” inspired other skaters to copy Tuktamysheva’s style and include “undressing” elements to their programs.

The skater, who is preparing for the new season, promised to include a quad jump in her free program to fight for a place on the national team.