Fans have praised two-weight UFC champion Amanda Nunes and her partner, MMA fighter Nina Ansaroff, after the strawweight gave birth to their daughter, Raegan Ann Nunes, in an arrival that they described as a ‘dream come true’. 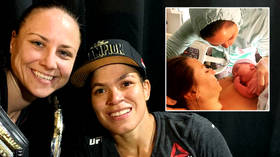 Bantamweight and featherweight champion Nunes has become the first UFC title holder to be a mother after the partner she had sparred with deep into her pregnancy gave birth, leaving Nunes “speechless”.

The “soulmates” first met when they sparred in Miami more than seven years ago, announcing Ansaroff’s pregnancy earlier this year as part of the long-term plan they had held to start a family together.

“I am so in love,” Ansaroff said, sharing a photo of herself cradling the infant after the birth alongside Nunes, who placed a comforting hand behind her neck.

So Amanda Nunes becomes the first Mom with a UFC championship! 👏

“I can’t wait to show you the world. You are a dream come true. Happy daughter’s day, my beautiful girl.”

Nunes has called Ansaroff her “rock” on her way to becoming the most feared name in women’s UFC, trusting her fiancee for vital psychological support on her way to winning her titles.

She had said that their desire to have a child would wait until one of the couple decided not to fight, but Ansaroff is expected to return to action next year and the pair have even refused to rule out competing against each other in the future.

Fellow UFC fighters Dustin Poirier and Tyron Woodley were among those offering their congratulations to Ansaroff.

“I am begging Amanda Nunes to drop to strawweight so she can fight her wife,” joked one fan as news of the birth spread.

Another declared: “Amanda Nunes is officially the mom champ champ. I don’t care what anyone says.”

Journalist Amy Kaplan called the photos “so beautiful”, while other admirers hit back at accounts who made denigrating remarks about their decision to have a baby.

“This really has brought out the worst of people on here,” said one on Twitter. “You all need five minutes alone in a room with Nunes to express how you’re feeling to her face.

“The amount of people willing to talk smack to someone who can break your body with one hand is ridiculous, hiding though the screen p*ssies.”

this post really has brought out the worst of people on here yall need 5 mins alone in a room with nunes to express you’re feeling to her face, the amount of people willing to talk smack to somone who can break your body with 1 hand is ridiculous, hiding though the screen p*ssys

We really gonna get Mother Lioness Amanda Nunes in her next fight. Whew. #UFC

Nunes accepted that she would encounter some negative responses. “A lot of people have a problem with you becoming a mother, of course,” she acknowledged before she defended her belts against Felicia Spencer at UFC 250 in June.

“It comes with the life – if you want to grow your family, you’re going to have a baby. I feel like a baby is something that helps you to grow as a person, as a human.

“You have something else to think about. Being a mother, being a champion is cool but it’s not something that I think about, really

“I just want to be a champion forever. Being a mother champion is the best.”

Ansaroff admitted last year that the pair received messages from young women “struggling in their own lives”, although she added that they were not “really deeply aware of issues”.

“There were funny moments early on, like the language barrier,” she told the Telegraph, reflecting on their initial correspondence with the help of Google Translate.

“Since we met each other, we’ve never spent a minute apart.”