Oklahoma State head football coach, Mike Gundy, is facing online wrath after being seen in a T-shirt bearing the logo of a conservative TV network, prompting calls for his firing and a star player threatening to boycott the team. 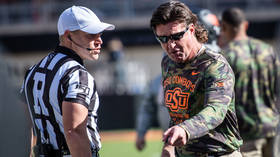 OSU coach Gundy sparked controversy on Monday, appearing in a photo online wearing a One America News (OAN) shirt, a right-of-center media outlet which often voices staunch support for US President Donald Trump. It wasn’t long before the wardrobe choice – on a private fishing trip, no less – landed Gundy in trouble, with star running-back Chuba Hubbard vowing to disassociate from the team entirely until “things change.”

“I will not stand for this. This is completely insensitive to everything going on in society, and it’s unacceptable,” Hubbard wrote on Twitter, apparently referring to ongoing police brutality protests across the US. “I will not be doing anything with Oklahoma State until things CHANGE.”

I will not stand for this.. This is completely insensitive to everything going on in society, and it’s unacceptable. I will not be doing anything with Oklahoma State until things CHANGE. https://t.co/psxPn4Khoq

While it’s not clear whether Hubbard was calling for Gundy’s termination or some other form of discipline, a number of fellow players quickly threw support behind their teammate, including linebacker Amen Ogbongbemiga and offensive lineman Teven Jenkins.

Netizens also joined the shaming parade, arguing that the T-shirt was itself tantamount to racism because OAN has positioned itself against Black Lives Matter – with a host once deeming the movement a “farce.” One especially zealous critic insisted that Gundy should lose his job short of agreeing to receive “extensive psychological help” for his apparently pathological fashion sense.

Yeah I have a tough time defending racism.

People who promote the racist propaganda hate speech on OANN are dangerous thugs. They have no place in respectable society. Mike Gundy cannot remain the OK State head coach. Too influential of a position in society. Fire him, unless he agrees to get extensive psychological help.

Some detractors defended Gundy’s right to dress himself – quite generously – but said that players had the same right to express themselves freely, including to boycott the team over their coach’s perceived misdeed.

Mike Gundy can wear whatever he wants, but whatever he wears may have consequences. #OKState players are letting their voices be heard.

A number of commenters rallied to the coach’s defense, however, voicing disbelief that merely watching “the wrong TV network” could result in career destruction and widespread vilification.

I hate OAN too, but damn, crazy to think how if you watch the wrong TV network nowadays, you can be slammed as a racist etc. without even knowing the person. Will be interesting to see where we are with free speech in 20-30 years.

You won’t stand for a guy wearing a t-shirt you don’t like? Do you think you should be the one dressing him every morning? I mean the narcissism is off the charts. Good Lord.

“I will not stand for somebody who has a different opinion than me,” another netizen said, describing the attitude of Gundy’s critics.

The president of the university, Burns Hargis, also soon weighed in with a tweet, stating the school administration would not “tolerate insensitive behavior,” prompting suspicions that Gundy may soon be handed the pink slip.

I hear and respect the concerns expressed by our Black student-athletes. This is a time for unity of purpose to confront racial inequities and injustice. We will not tolerate insensitive behavior by anyone at Oklahoma State.

Drew Brees is on his tenth apology by now for not disavowing his country and Mike Gundy could possibly be fired for wearing an OAN shirt.We live in an ugly world where dissenting opinions from the cultural elites will destroy your career. https://t.co/QL9uFUYzAK