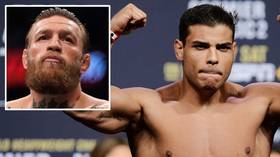 The controversial Brazilian earned headlines by echoing heavyweight champion Jon Jones’s discontent about the money on offer from the UFC, warning that he wanted “15 million like Jon” to take his increasingly acrimonious rivalry with Israel Adesanya into the octagon.

Costa, who is unbeaten in five fights and unsuccessfully tried to convince UFC president Dana White that he had recovered from an injury in his bid to face reigning champion Adesanya in March, also hinted that he wanted to coach in The Ultimate Fighter, tweeting “Adelasanha x Costa” before asking: “Who likes that match?”

In a now-deleted tweet, he then posted a picture of a phone screen carrying a camera roll of various pornographic images under a photo of an interview being carried out by journalist Brett Okamoto.

The slugger removed the bizarre post hours later, hastily tweeting: “Sorry, my mom forced me to erase the Okamoto pic. I don’t even know why.”

I don’t even know why

His decision to delete the offensive tweets fits his fighting nickname, “Borrachinha,” which translates as “The Eraser,” but Costa, who was clearly in the mood to provoke during an impromptu Q&A on Twitter, continued his jabs.

And when a fan suggested UFC president Dana White would give the Brazilian a $200,000 take-it-or-leave-it offer to fight for the UFC middleweight title, Costa replied, “I kill him.”

Costa has not fought since his unanimous decision victory over Yoel Romero at UFC 241 last August, but his much-anticipated meeting with Adesanya could take place on “Fight Island,” although he may need to lower his financial demands to secure his title challenge.