The league-based MMA promotion, the PFL, is putting together ambitious plans for its return to action next year, and the company’s CEO Peter Murray revealed they have big plans for Russia in 2021. 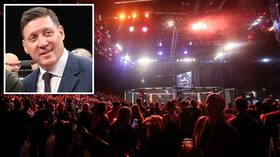 The series, which focuses on a league-format approach, features six weight classes featuring top-level talent from around the world. And, as well as their existing contracted talent, Murray says the promotion is ready to draft in the best up-and-coming talent from key regions, with Russia high on that list.

That plan involves the PFL hosting “International Qualifier Series” events in key nations, with the top performers earning a spot in the main PFL regular season for either 2021 or 2022.

“We’ve had great success partnering in different parts of the world to identify and sign different athletes to the PFL,” Murray told RT Sport during an exclusive phone interview this week.

“In fact, we were scheduled (to host a PFL ‘International Qualifier Series’ event) earlier this calendar year, but it was postponed due to the pandemic, but we are looking to reschedule for the first quarter of next year ahead of the 2021 season, in Russia.

“There will be other international markets that we do include in our plans for the 2021 international qualifier series, so we are very excited to continue developing the sport, grow the PFL and identify and recruit new athletes from Russia.”

Russian athletes have already made a big impact in the PFL, and Murray says the success of Russian fighters is only the tip of the iceberg as the promotion welcomes back some of its biggest Russian stars for 2021, and steels itself for an influx of the next generation of fighting talent from the region.

“Currently, we have Magomed Magomedkerimov, the 2018 PFL welterweight champion. The Russian fanbase loves to watch ‘Mago’. He’s a gamechanger,” he said.

“In 2019 he made it into the post-season but in his second fight in the playoffs, he was fighting with a broken hand (and) he could not come back to compete. So he absolutely has something to prove when he comes back in 2021. Our current heavyweight champion Ali Isaev is Russian, and we can’t forget Movlid Khaybulaev. He had that spectacular flying knee.

“With former champions, current champions and big-time moments, that’s what lights up a fanbase, top talent from around the world and dialing in those local athletes.

“Beyond the live events, we’ll tell their stories. For example, in Russia we will be launching a bespoke Russian YouTube channel. Since we have over 12 Russian athletes in the league, so we’ll program that channel to run through the lens of the Russian fans and the Russian fighters.”

With an “International Qualifier Series” event being planned for Russia in early 2021, plus a crop of world-class Russian talent already on the roster, there’s plenty to look forward to for Russian fight fans when the PFL returns to action in 2021.