Russian figure skating prodigy Veronika Zhilina has wowed her fans by successfully landing a quadruple toe loop during a training session in Moscow. 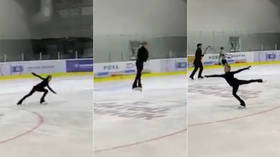 The 12-year-old who left Eteri Tutberidze’s group in May has been training under the guidance of two-time Olympic gold medalist Evgeni Plushenko.

Plushenko shared a video of the skater’s successful attempt which shows Zhilina effortlessly making four rotations before landing the jump.

Plushenko and Tutberidze were embroiled in a fierce online spat after the former skater commented on Alina Zagitova’s career break suggesting that she might have retired.

Tutberidze in return accused Plushenko of being a fake coach who doesn’t even attend skaters’ training sessions.

Their relations deteriorated after one of Tutberidze’s brightest stars Alexandra Trusova quit her camp to be coached by Plushenko.