Real Madrid captain Sergio Ramos has extended an invitation to Conor McGregor to join him at a future training session after the Irish ex-UFC fighter posted a video to Instagram showing off his efforts at the ‘beautiful game’. 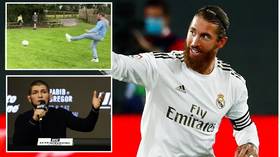 McGregor showed off his skills at the grounds of local Dublin club Black Forge FC – a community team he is involved in the funding of – as the former two-division UFC champion uses his left foot to bend a series of shots past a goalkeeper.

The footage, which was published on McGregor’s Instagram page, comes days after Spain star Ramos asked for McGregor’s opinion of a clip from a recent Real Madrid training session in which he performed the Irishman’s infamous ‘Billionaire Strut’ celebration after sending a shot into the top corner of the goal.

💣🚀💥 What do you think, @TheNotoriousMMA?#HalaMadridpic.twitter.com/NqitNLGzTu

And perhaps asking for a couple of pointers, McGregor tagged Ramos in the post – and the World Cup winner replied with his invitation to the Spanish capital.

Whether or not McGregor takes up Ramos on the offer will remain to be seen, but with his UFC rival Khabib Nurmagomedov being an avid supporter of the Spanish side, you can bet that the Irishman will show up with a pair of boots if he feels there is a mental edge to be taken from it.

McGregor announced his (third) retirement from mixed martial arts earlier this year but is heavily linked with making a return to the cage late this year or early next, but if it transpires that he never straps on a pair of 4oz gloves again at least he will be available for appearances on the celebrity football circuit.