A man has been charged in relation to the plane crash which caused the death of Argentinian striker Emiliano Sala, who was killed when a plane he was travelling in crashed into the English channel in January 2019. 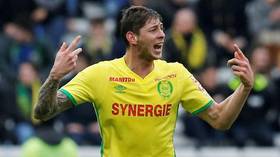 The Civil Aviation Authority (CAA) revealed on Thursday that David Henderson, 66, pleaded not guilty last month to charges under the Air Navigation Order related to the crash which killed Sala, 28, and the pilot, David Ibbotson last year.

The crash occurred as Sala traveled to attend the first training session with his new club, then-Premier League outfit Cardiff, shortly after completing a transfer to the Welsh side from Ligue 1 outfit Nantes.

Sala’s body was recovered from the accident site near Guernsey, 68 meters below the surface. The body of the pilot was never recovered.

According to the CAA, Henderson has been charged with two offences linked to him allegedly organizing the flight, and he is being accused of behaving in a “reckless and negligent” manner related to his commercial use of the aircraft involved in the accident.

“The UK Civil Aviation Authority has commenced a prosecution of David Henderson for offenses associated with the fatal light aircraft accident over the English Channel in January 2019,” the CAA said.

Henderson is due to appear in court later this month ahead of a full inquest expected to take place in 2022.

Per legal counsel representing the CAA, “On 9 September 2020, the CAA issued two summonses against David Henderson for offences under the Air Navigation Order.

However, lawyers representing Sala’s family have hit out at reports that the inquest into the accident may not proceed until the criminal charges against Henderson have been processed.

“There is a significant public interest to this inquest and delays should be avoided in the interest of public safety,” Matthew Reeve said.

“There has already been a delay of two years and it is the wish of the family that this inquest hearing go on as planned. One does not have to imagine the impact on the family of further delay.”

An investigation into the circumstances of the crash by the Air Accidents Investigation Branch concluded that neither Ibbotson nor the plane itself were licensed to operate commercial flights – despite Ibbotson being paid a fee for the flight.