Alexander Povetkin will face Dillian Whyte in a rematch on November 21 after the Russian blew away the British boxer in 5 rounds in August with a stunning uppercut that knocked Whyte out cold. 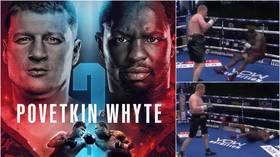 Whyte promoter Eddie Hearn confirmed on Tuesday that the rematch will take place on November 21, but did not confirm a venue, although it is expected to take place in London, after initial reports suggestions Povetkin’s team wanted the fight in Russia.

The Russian, who has turned 40 since the first fight at Matchroom Fight Camp, produced one of the knockouts of the year when he knocked Whyte out cold with a perfectly-timed uppercut in the fifth round, having been knocked down twice in the fourth.

Responding to news of the fight, the 2004 Olympic gold medalist said he was ready for the rematch after taking time out to be with his family.

“I’ve had time to relax and spend time with my family, and now, I’m ready to train just as thoroughly as the first time,” he said, in a statement released by his promoters World of Boxing.

“Whyte is a good, strong boxer. I said that before the first fight. I’ll be ready on November 21. I’m sure we’ll show a good, entertaining fight.”

Repeat or Revenge!? After all the drama the first time, they do it all over again on November 21 #[email protected] 🔥 pic.twitter.com/0mXVUXlUcB

Povetkin promoter Andrey Ryabinskiy said that Whyte “deserves respect for wanting rematch” and that his team never intended to deny the Londoner the chance to rectify the defeat.

“Dillian had right to a rematch and decided to use it. We’ve never backed out of agreements. Whyte’s a dangerous guy. We saw that in first fight, he deserves respect for wanting a rematch,” he said.

Whyte’s path to a world title was derailed by former WBA heavy champ Povetkin, but the ‘Bodysnatcher’ will be looking to get the show back on the road against the veteran Russian at the end of November.