Ilnur Zakarin has been forced to concede that he had “no way to continue the race” after suffering an agonizing rib break in a pre-race accident, putting him out of the Tour de France despite his attempts to join the 12th stage. 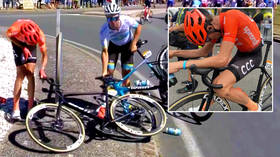 Two-time Russian national champion Zakarin has seen his dreams cruelly dashed within the space of four painful days at the gruelling race.

The Cyprus-based Russian had established a comfortable-looking lead around 22 miles from the finish of stage eight on Saturday, only to make an uncertain descent on the Pyrenees that fans derided and commentators described as “horrible”.

His tour took a turn for the worse as he fell before stage 11 had even started on Wednesday, colliding with two other riders on a roundabout before dusting himself off to take part in the stage.

💥 We’re not yet at the départ réel but there’s already been a crash! The three riders are all ok.💥 Chute sans gravité de 3 coureurs avant le départ réel !#TDF2020pic.twitter.com/IyXYeTRC6k

After a sleepless night of discomfort, the 30-year-old started the 12th stage but ended up leaving in a medical car.

“I was upset as I was really looking forward to several mountain stages and wanted to try,” rued the formidable climber. “But there is no way to continue the race. Hopefully the recovery will go quickly.”

The former Sochi Grand Prix and Tour de Romandie had battled through to finish 136th at the previous stage, more than four minutes behind the winner.

Breakaway 14′ ahead of the peloton wow! @IlnurZakarin could now stop for coffee and still probably win stage 8.#TDF2020

He gave it his all today 👊👊 but it wasn’t meant to be for Ilnur Zakarin on #TDF2020 stage 8 as he crosses the line in fourth place behind the day’s winner Peters (ALM). Great effort from Ilnur nonetheless today 👊💪#RideForMorepic.twitter.com/2c3Q8xKAWt

Ilnur Zakarin might be the one rider I get scared watching when they descend… like my god, a frickin mountain goat climber but descends like a 13/14 on an old canti CX bike

Unlucky Ilnur Zakarin – crashing in the neutralised zone and breaking a rib is not what you want halfway through Le Tour https://t.co/ahnuuxmnmF

“Ilnur Zakarin was involved in a crash in the neutral zone of stage 11,” said the team’s Dr Daniele Zaccaria, who ordered “conservative therapies” to be carried out in a bid to allow Zakarin to continue competing.

“X-Rays performed at the finish in Poitiers confirmed a non-displaced fracture of the sixth left rib.”

Zakarin’s only stage win at the tour came in 2016, although he picked up a win at the Giro d’Italia last year, adding to his previous stage victory there in 2015.