The Saudi-led takeover of Newcastle United is facing more potential complications after a WTO ruling stated that the Middle Eastern kingdom had faciliated a service streaming pirate Premier League broadcasts. 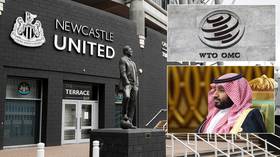 The Saudis’ bitter regional rivals Qatar took the case to the WTO after Doha-based broadcaster BeIN Sports said its exclusive Premier League rights were being hijacked by pirate broadcasts from a network called ‘beoutQ’, supposedly with backing from the Saudi state.

A WTO report on Tuesday ruled that the Saudis “infringed” international trade agreements by not clamping down on the service.

The WTO panel also concluded that “beoutQ’s piracy was promoted by prominent Saudi nationals” – including Saud Al-Qahtani, an ally to the Crown Prince Mohammed bin Salman – and that the pirate broadcasts had been “transmitted via [Saudi-based] Arabsat satellite frequencies.”

It added: “The Panel considers that Qatar has established a prima facie case that beoutQ is operated by individuals or entities subject to the criminal jurisdiction of Saudi Arabia.”

The case is seen in the broader context of the clash between Riyadh and regional rivals Qatar, against whom it joined an economic blockade in 2017.

The ruling could not come at a more delicate time for the Saudis as they bid to push through the £300 million (US$380 million) takeover of Premier League club Newcastle United.

Under the proposed takeover, the Saudis would take an 80 percent stake in the club through their vast sovereign Public Investment Fund (PIF), which is chaired by the crown prince, while the remaining 20 percent share would be divided between UK financier Amanda Staveley’s PCP Capital Partners group and billionaire UK property developers the Reuben brothers.

The bid to take over the club from current owner Mike Ashley has already been at the consideration stage for several months with the Premier League.

Pressure to block the deal has also come from groups such as Amnesty International, which have cited the Saudis’ human rights record, as well as from the fiancée of murdered Saudi dissident Jamal Khashoggi.

The Premier League had already received details of the WTO report before the full details were published on Tuesday.

Premier League chief executive Richard Masters has so far kept tight-lipped on the status of the takeover, however, as it passes through the league’s fit-and-proper owners tests.

In addition to claims of Saudi ‘sports-washing’, Masters faces the choice of allowing a nation into the league which has effectively been accused of directly damaging its interests through facilitating piracy.

However, those backing the takeover will still hold out hope of it being completed, given the WTO report did not specifically name the PIF or figures directly involved in the Newcastle takeover bid, and fell short of stating direct Saudi state involvement with the pirate broadcasts.

The Saudis have the right to appeal the decision, while the WTO panel also supported their claim that they could block Qatari broadcaster beIN Sports from taking legal action in the country based on national security grounds.

“Saudi Arabia has a strong record of protecting intellectual property and is committed to applying its national law and procedures in full conformity with WTO rules,” Riyadh’s mission to the WTO said, Reuters reported.