The International Olympic Committee’s Twitter account has come in for a mauling after sharing an enthusiastic ‘throwback Thursday’ post to the infamous 1936 Berlin Games in Nazi Germany. 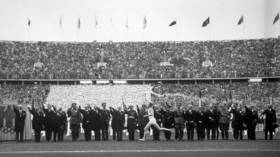 Marking the one-year mark until the delayed Tokyo Games next summer, the official Olympics Twitter account on Thursday initiated what appeared to be an innocuous throwback to notable torch moments of yesteryear, drawing in replies from other official accounts from countries which have hosted the sporting spectacular in the past.

Kicking off with the Games in Amsterdam in 1928, the account received replies covering the Summer Games in Antwerp, Belgium, in 1920 and LA in the US in 1932.

One year to go until @Tokyo2020! One year until the Olympic flame shines bright again – just like it did for the very first time at Amsterdam 1928 🇳🇱. Wishing the best to everyone involved in preparations 😍 #StrongerTogetherpic.twitter.com/DMrH0PrbuZ

But a glowing throwback to the first-ever torch relay to bring the Olympic flame to the cauldron in Berlin in 1936 went down far less well.

“This is turning out to be quite a #ThrowbackThursday already!

“Berlin 1936 marked the 1st Olympic torch relay to bring the flame to the cauldron. We can’t wait for the next one in #StrongerTogether,” the account wrote in a message to its 6 million followers, accompanied by footage from the Games.

This is turning out to be quite a #ThrowbackThursday already! Berlin 1936 marked the 1️⃣st Olympic torch relay to bring the flame to the cauldron. We can’t wait for the next one in 🇯🇵 🙌 #StrongerTogetherpic.twitter.com/x4MjbaWi1f

For many, speaking in such positive tones about Games which took place under the watchful eye of Adolf Hitler and were used as a Nazi propaganda exercise proved too much to stomach.

The official Auschwitz Memorial Twitter account used the opportunity to educate followers on the atrocities of Nazi Germany, commenting: “For two weeks, the Nazi dictatorship camouflaged its racist, militaristic character.

“It exploited the Games to impress foreign spectators with an image of a peaceful, tolerant Germany. Later, Germany’s expansionism, the persecution of Jews and other ‘enemies of the state’ accelerated.”

For 2 weeks the Nazi dictatorship camouflaged its racist, militaristic character. It exploited the Games to impress foreign spectators with an image of a peaceful, tolerant Germany. Later, Germany’s expansionism, the persecution of Jews & other “enemies of the state” accelerated.

Others jibed about the choice of imagery accompanying the tweet and its hashtag message ‘StrongerTogether’, noting that the historic torch relay was probably the last thing people would associate with those particular Games.

It’s always sensible to use the images from a Nazi propaganda film (Riefenstahl’s Olympia) to say #StrongerTogether. How many Jewish athletes were permitted to compete for Germany? Why did Brundage stop Jewish US athletes protesting?

You kow that the guy, who opened the Berlin 1936 Olympic Games a few years later invaded Belgium and murdered their jewish people?Do you really think, this is the best answer to the Team of Belgium?

😳 I’m pretty sure that’s not what most people associate with that particular Olympics pic.twitter.com/Y8FoOcgcob

Yet more angry Twitter users queried whether the IOC account’s social media team even knew the significance of what they were posting about, also smashing the tweet for being “disrespectful” to those who suffered at the hands of the Nazis.

Are. You. Literally. Ok? Did you realise what you did there?

This is disrespectful to all German jewish people who were already suppressed at this time! The antisemitic and rasist ‘Nuremberg Laws’ had been passed a year before but that was no problem for the IOC. Letting the games take place in a dictatorship still seems ok to you.

The 1936 Berlin Games were the last before war engulfed Europe and then the wider world, with the Summer Games only resuming in London in 1948.

The hosts topped the medals table with 89 podium finishes in total, although the Games are most vividly remembered for their Nazi imagery and also the four gold medals won by US athlete Jesse Owens, held up as a symbol of defiance to Hitler’s plans for Aryian dominance.

Uhhh…honestly don’t know what to say. You realise this is Nazi Germany right?

Despite outrage in the US and Europe, where people demanded a boycott of the Olympics because of what would later be recognized as human rights abuses, Hitler opened the Games in his role as chancellor.

“Non-Aryans” – Jews or individuals with Jewish parents and Roma (Gypsies) – had been systematically banned from joining German sports associations and using facilities for at least three years before the opening ceremony.

The US Holocaust Memorial Museum describes the torch as “perfectly suited” to Nazi propagandists, who often used torchlit parades and rallies to recruit Germans to their hateful movement.