Reigning world and Olympic figure skating champion Alina Zagitova has pulled out of the pre-season test skate in Moscow, triggering angry reactions from fans who had already bought tickets for the upcoming event. 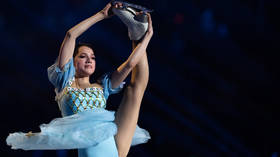 Zagitova’s participation in the pre-season event had been confirmed by the Russian Figure Skating Federation, with fans anticipating her long-awaited comeback following a lengthy break.

The skater paused her competitive career last year, explaining that she needed a respite after two hard seasons during which she scooped European, world and Olympic titles.

The athlete immediately dismissed rumors about her possible retirement, promising to return to the ice as soon as she feels ready to compete at the highest level.

At the beginning of the new season, Zagitova and her choreographer Daniil Gleikhengauz intrigued lovers of figure skating by announcing that they were working on new programs.

The Olympic champion constantly fueled rumors about her return, posting videos from her resumed training sessions.
However, her highly anticipated comeback has been delayed again, after the athlete withdrew from the test skate due to her involvement in a television show, where she will make her debut as a presenter.

“I have decided not to take part in the test skate scheduled for Sep 12-13 because now I’m interested in taking up the new role of ‘Ice Age’ hostess,” Zagitova said, announcing her decision just three days before the planned start.

Her late withdrawal caused an uproar among figure skating fans, who had bought tickets to the upcoming event hoping to see their idol in action.

“Shame on you, you could have announced it earlier,” one person wrote.

“It’s a pity she will not compete, though she said she can’t imagine her life without figure skating,” another user wrote.

“While other skaters withdraw because of injuries, Alina withdraws because of yet another whim,” a comment read.

“Alina you should record a video addressing your fans. They have bought tickets to watch your skating,” one more fan added.

“There has never been such a skater who humiliated his fans like that. People spent their money to buy tickets. You could have warned then earlier,” a user said.

Zagitova hasn’t yet confirmed her retirement from sport, but now she has a full-time job on ‘Ice Age’ it has become clear she will miss another competitive season.