Georgian UFC fighter Liana ‘She Wolf’ Jojua will have the chance to bounce back from a debut defeat in the promotion when she faces Romania’s Diana Belbita on ‘Fight Island’ on July 15. 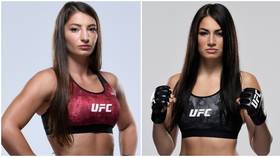 The bout will be on the UFC’s fabled ‘Fight Island’ in Abu Dhabi, where the organization will host a series of cards in July, primarily for fighters unable to compete in the US die to coronavirus restrictions.

Jojua, 25, made her UFC bow against Canada’s Sarah Moras back in September also in the UAE, on the UFC 242 card headlined by the men’s lightweight title unifier between Khabib Nurmagomedov and Dustin Poirier.

Jojua was stopped midway through the third round of the bantamweight contest, although appeared considerably undersized against Moras, who had missed weight for the bout.

After her defeat – which saw her slip to a 7-3 overall record – Jojua signaled she would drop down into the flyweight ranks, initially calling out Australia’s Nadia Kassem.

However, she has now found her next opponent in the form of ‘The Warrior Princess’ Belbita – whose own UFC debut in October similarly ended in failure, in her case via unanimous decision to English brawler Molly ‘Meatball’ McCann.

The 23-year-old Belbita is 13-5 overall, having spent most of her fledging career in the ranks of Romanian-based promotion RXF.