World Cup winner and in-form Premier League striker Olivier Giroud’s decision to stay at Chelsea was reportedly down to his wife’s close relationship with Marina Granovskaia, the director who is leading the charge for Kai Havertz. 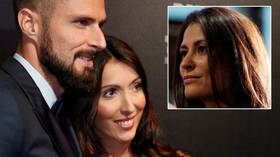 Giroud was on the brink of leaving Stamford Bridge after a first half of the Premier League season in which he rarely featured for a youthful Chelsea side, starting only twice and being left out of the squad entirely for 10 matches before the start of February.

London rivals Tottenham and Serie A giants Inter Milan and Lazio are all said to have been interested in signing the 2018 World Cup winner with France, only for the coveted 33-year-old targetman to feature in all of Chelsea’s league games since then, scoring eight times in 13 appearances in all competitions.

His rise from the fringes of the squad to earning a new one-year contract extension has reportedly been influenced off the field by a strong friendship between Giroud’s wife, Jennifer, and Russian-Canadian director Marina Granovskaia.

“Marina was the one who stopped Giroud leaving in the winter,” Bild reporter Christian Falk told the Byline. “She was really close to his wife.”

Unlikely hero Giroud will be looking to score for the fifth Premier League match in six as Chelsea face a season-defining final game at home to Wolves on Sunday, when a point will be enough to secure Champions League football and the ensuing financial boost that would make Granovskaia’s negotiations with Havertz and others more straightforward this summer.

German transfer expert Falk explained that playing in the Champions League is an obvious incentive for Havertz, who will miss out on the most prestigious competition in Europe should he stay at Bundesliga side Bayer Leverkusen, but “not necessarily a deal-breaker.”

Defender and fellow Germany international Antonio Rudiger is believed to be “flirting” with Havertz over his potentially imminent move to join him at Chelsea, which Granovskaia is playing an instrumental role in as usual.

Chairman Roman Abramovich and Granovskaia are thought to be ready to offer a different payment scheme to Leverkusen should they fail to reach the Champions League, which is worth around $50 million more to the club than the place in the Europa League they would risk with defeat to Wolves.

Havertz is expected to cost around £90 million ($115 million), eclipsing the outlay of more than £70 million ($90 million) paid for goalkeeper Kepa Arrizabalaga in 2018.

Despite jibes about the signing of Kepa, whose form and future at the club have been repeatedly scrutinized this season, fans have declared their faith in Granovskaia, with one stating “the absolute obvious” by rating her acumen above Manchester United executive vice-chairman Ed Woodward.

Another labeled Granovskaia a “workaholic” and praised her role in the arrivals of the likes of Eden Hazard, Timo Werner, Hakim Ziyech and Giroud, adding: “Expect Havertz.”

Marina Granovskaia is a workaholic when it comes to transfers.When Micheal Emenamo left, we all thought it was over but Roman gave her that opportunity and she has never disappointed.Luiz, Hazard, Willian, Giroud, Werner, Ziyech, Pulisic are few of her hits. Expert Havartz 🙏🙏

Would just like to state the absolute obvious:Marina Granovskaia > Ed WoodwardThat is all.

Marina Granovskaia is a genius bruh!

“Chelsea actually bought the next Hazard for less than half of what they sold the actual Hazard,” said a United fan in reference to US midfielder Christian Pulisic’s impressive first full season at the club, receiving a reply calling Granovskaia a “genius”.

“Yeah, Kepa was an expensive bad move, but Chelsea fans need to cut Marina Granovskaia some slack,” one said, addressing accusations around the occasionally calamitous keeper.

Yeah, Kepa was a bad move, and an expensive bad move, but Chelsea fans need to cut Marina Granovskaia some slack. She is one of the best wheelers and dealers out there. She managed to pull off Ziyech AND Werner, without even having guaranteed UCL to offer. She is a gem.

It’s Roman Abramovich and Marina Granovskaia’s world and we are all just living in it.

“She is one of the best wheelers and dealers out there. She managed to pull off Ziyech and Werner without even having guaranteed [Champions League football] to offer. She is a gem.”

Abramovich and Granovskaia are about to find out if they will need to repeat that trick with Kavertz. Whether or not Giroud can find the net again, Chelsea can make their lives easier with one last good performance.