Russian Olympic gymnastics stunner Karolina Sevastyanova has fired back at critics of her photo with Irish megastar Conor McGregor, rejecting the suggestion she’d got a little too close when posing with the notorious Irishman. 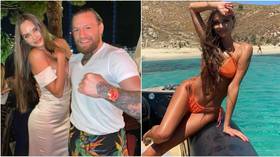 The 25-year-old Monaco-based bombshell posted a photo on Instagram to her 416,000 followers last week in which she was seen with one arm behind a beaming McGregor’s back while he had an arm around her waist, and his other with his fist clenched in a classic fighting pose.

Former two-weight UFC champion McGregor, 32, was holidaying in the French Riviera with his family including partner Dee Devlin when he was presumably asked for the photo opportunity by Sevastyanova.

But the gymnast has now fired back at what appears to be criticism from fans suggesting she was too full-on in the image.

“Guys, stop asking me these questions! I approached him with my man, and he was with his wife,” Sevastyanova wrote in her Instagram Stories on Saturday.

The Monaco-based beauty retired from professional sport at the age of just 17 after scooping gold in the group event at the 2012 Olympics in London. She is also a double European Champion.

She has since dabbled with modelling, appearing on the cover of the Russian edition of Maxim in 2015, as well as TV presenting, while her Instagram photos detail a life of luxury in Monaco and locations such as London.

She has previously been romantically linked with Russian ice hockey star Alexander Ovechkin, but is now with wealthy business heir Alexander Mazanov.

Aside from his photo call with Sevastyanova, McGregor’s stay on the Mediterranean coast also included a meeting and water bike trip with Princess Charlene of Monaco, with whom McGregor revealed he is planning a charity voyage to raise money for water safety.

“A Great day racing the water bikes with Princess Charlene of Monaco,” McGregor stated on Instagram alongside an album of photographs showing he and partner Devlin socializing with the Monegasque royals.

“A phenomenal athlete and Olympian, we are teaming up for a 180km voyage in September to raise awareness in water safety. I cannot wait!”

Princess Charlene is a notable athlete in her own right, representing South Africa at the 2000 Olympics where her team finished in fifth position in the 4x100m medley relay.

McGregor is currently ‘retired’ from MMA, claiming at the beginning of June that the fight game “no longer excites him.”

Many have taken that with a pinch of salt, however, as it is the Irishman’s third such statement in the past four years.