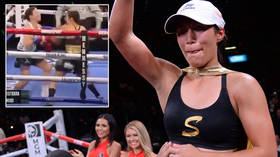 Veteran Adkins was a late replacement after the relatively experienced Mexican Jacky Calvo suffered a knee injury, entering the ring against the unbeaten Estrada with a flawless five-fight record that had been padded out by beating four opponents who had never fought professionally before and winning a rematch against one of her previous victims.

There had been murmurs of concern for the 42-year-old on social media ahead of her brave decision to take on a title holder 14 years her junior with an excellent record, and her statuesque start to the scrap, standing in her corner while Estrada charged intently towards her, looked far from the showboating style that some strategists use to stand and size up their rivals in the opening stages of cagey contests.

The cancer survivor was swiftly battered by a rapid three-punch combination to her body and face that dropped her defensive stance and allowed Estrada to repeat the attack with a four-punch assault that left the annihilated Atkins flat out on the canvas and requiring immediate treatment as she lay outside the ropes.

Well, that wasn’t fair at all. Seniesa Estrada runs out of her corner, throws five punches and finishes Miranda Atkins in a matter of seconds. #OrtizVargas

“Well, that wasn’t fair at all,” wrote one boxing writer, while others called the match-up “heinous” and “awful”. One said: “It was one of the worst things I’ve ever seen. That was disgusting.”

“How did Miranda Adkins get cleared for this fight? The California Commission ought to be ashamed of itself,” added a columnist, having watched the lightning demolition unfold on the undercard of Vergil Ortiz Jr’s seventh-round stoppage of Samuel Vargas in California.

A fan wrote: “Hope Adkins is ok. Don’t want to celebrate while she’s hurt but that’s as easy as it gets for Estrada KO backers.

“It was free f*cking money. That fight should have never in a million years been sanctioned.”

NBA legend LeBron James had shown his support for Estrada by posting footage of her pre-fight preparations to his Instagram following of almost 69 million.

How did Miranda Adkins get cleared for this fight? The California Commission oughta be ashamed of itself.

Miranda Atkins had no business being in the ring with Seneisa Estrada. That was awful matchmaking.

“Bang bang, night night,” the Los Angeles Lakers forward declared once the fight was over, admiring the work of a fighter with whom he shares a supplement endorsement.

“I couldn’t find any film or videos of her so I wasn’t really sure what to expect,” Estrada told EsNews.

“So going in there, I just wanted to be first and overwhelm her. As soon as my punches started flying, I couldn’t stop them.”

Speaking about Atkins with ESPN, she added: “I give her so much respect.

“She’s the one who stepped up and took the fight. I knew I had more experience than her.

What a disgrace. Who approved that Seniesa Estrada-Miranda Adkins fight? Sergio Mora just said that Adkins didn’t belong in the ring with Estrada. Duh. The California commission and whoever else played a role in making that fight should be ashamed. #boxing

Estrada did what she had to do, but Adkins has no business in there with her. She could have been killed.

Shame on @GoldenBoyBoxing for putting Estrada in with Adkins! Terrible for the sport, that poor woman had no business being in there with Estrada.

Estrada said after the fight it was a replacement. They reached out to other fighters but Adkins took the fight. She knew what it was and was a true professional about it.

“She’s in there to hurt me as well so I went for the knockout.”

Estrada had been out of the ring since she beat Marlen Esparza by a technical decision in Las Vegas in November.

“I want all the champions,” she said after her rapid return win.

The Los-Angeles based slugger would have needed to floor Atkins with her first attack to have had a chance of eclipsing the fastest knockout in boxing history, which Guinness World Records reports took place in Minneapolis in November 1947, when Mike Collins beat Pat Brownson in four seconds.