The organizers of the Olympic Games in Tokyo have been told by medical experts that there is no case for the Summer Olympics to be canceled or moved due to the coronavirus outbreak. 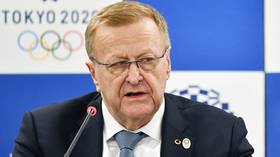 The World Health Organization (WHO) informed the International Olympic Committee (IOC) that there is no need to consider moving the Games or canceling them outright as a result of the outbreak.

The event kicks off on July 24, with Japanese organizers saying that testing and containment measures will be ramped up after the country’s first confirmed coronavirus-related death.

Head of the IOC’s coordination commission John Coates said advice the IOC had received “externally” from the WHO was that “there is no case for any contingency plans of canceling the Games or moving the Games.”

The spread of the coronavirus has forced the cancellation or rescheduling of a host of international sporting events, including a number of 2020 Olympic qualifying competitions for sports including badminton and boxing, both of which were set to take place in China.

But the work being done by the Japanese organizing committee’s virus task force and other national bodies has given confidence to both the IOC and the WHO that the situation will be under control by the time the Games begin in the summer.

Coates held a joint press conference with Tokyo 2020 President Yoshiro Mori, and told reporters that the expectation was high that “we’ll be able to ensure that the Games go ahead in a way that’s safe for athletes and spectators.”

CEO of the Games’ organizing committee Toshiro Muto had previously said that he was “seriously worried” about the impact the virus might have on the Olympics, but later said the Games would go ahead as planned.

There have been more than 60,000 coronavirus cases in mainland China, with around 450 across 24 other countries and territories. Thirty-three of those occurred in Japan, with another 218 on a cruise ship quarantined in a Japanese port.

Despite the challenges faced by organizers and team officials, Coates praised China for their reaction to the outbreak, saying it had impressed him in how they have monitored their athletes “since day one,” and explained that most of their stars had been preparing for the Olympics overseas and would likely not need to go through the quarantine process upon their arrival in Japan in the summer.