The NBA bubble designed to mitigate the spread of the coronavirus ahead of the upcoming resumption of the basketball season comes with its own challenges according to one insider, principally the lack of privacy and a lack of sex. 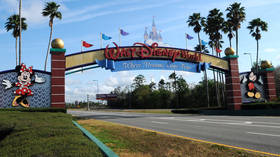 The temporary quarantine situation could see players from some teams cooped up at the Disney World resort in Orlando, Florida, for a period of up to three months – and while for the most part the players are being treated to luxurious facilities, for some there still remains some aspects of the situation which are less than ideal.

Los Angeles Clippers star Lou Williams looks set to be sanctioned after allegedly visiting a gentleman’s club in Atlanta after he was granted temporary permission to leave the bubble to a attend a funeral, and will now almost certainly miss at least one game due to an enforced period of isolation he most complete.

This perhaps illustrates the issues faced by the modern sportsmen who are temporarily uprooted from their own environment and placed inside of another (in which they are told not leave under penalty of suspension).

And, according to Marcus Thompson of The Athletic, the lack of availability to sex is becoming an issue. For now, only players are team personnel are permitted to enter the bubble meaning – meaning that visits from wives and girlfriends are off the table – but Thompson says that some players have found a workaround.

“From what I was told people are already working around it. You can’t have family but you can have a trainer or a massage therapist,” Thompson told The Athletic NBA Show.

“So what I’ve been told is that there have been some pretty hot massage therapists come though. There’s a couple trainers who you know… they’re a backdoor is what I’m saying.”

With the resumed games set to begin on July 30 and continue through October, you can imagine that some players will face a long wait before they can get back to their pre-NBA bubble lives, but if we are already hearing reports of players leaving to visit strip clubs or others sneaking in masseurs, you can be sure that it’s going to be a long three months for a handful of the NBA’s stars.