Bellator MMA fighter Anastasia Yankova has revealed the bizarre messages she receives from fans on Instagram, including requests to be held, tickled and beaten and offers of slavery that the Russian said had left her “scared”. 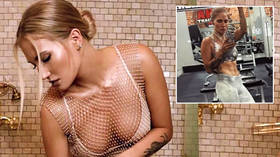 Flyweight favorite Yankova has more than 195,000 followers on the social media platform, many of whom have enjoyed her scantily-clad posts including lounging semi-naked on her bed, showing off her athletic body in tiny bikinis and demonstrating her strength and endurance in the gym.

The Moscow-based former kickboxer has not fought since the only loss of her six-fight professional career, in which she lost on a decision to Kate Jackson at Bellator 200 in May 2018 in London, but she still retains a huge fanbase, leading to frequent lewd messages.

“People really want your shoes – they want to smell your feet,” Yankova told a YouTube interview, admitting that the sexual correspondence had taught her about “all the perversions that exist in the world.”

“I learned what a foot fetish is. There are people who like to sit in the arms of a strong woman. Slender-looking men like to be held in their arms by strong women.

“Perhaps it has something to do with the mother’s story. [Maybe they] want to be back in their mother’s arms, I don’t know. They are even willing to pay for it.

“Or, for example, hit in the groin. They are also willing to pay for that. There are people who like to be tickled, or they tickle you, I don’t know.

“Recently a person wrote to me offering to become my slave. I joked with my friends that if they could wash the dishes and clean, then in general there would be nothing wrong with that.”

The tattooed ex-Muay Thai champion claimed that she did not look at her social media before fights when she burst onto the scene in 2016, and she has not engaged with the weird invitations she has been sent during her inactivity.

“Have I answered? No,” she confessed. “I’m scared. Let everyone do what they like. There is nothing wrong with it as long as it doesn’t hurt the other person…only without my participation in it.”

The 29-year-old has been known to post unflinching photos of her post-fight injuries and shots of herself on the operating table.

“I had an operation because my nose was completely off its axis,” she said. “To return it to the center of my face, to the place where it should be, it had to be operated on.

“But as I understand it – as the doctor told me – there is no point in making cosmetic changes so that everything is perfect and even…because they can break again.

“And with each fracture, the cartilage becomes more fragile. Even if you are a super cool fighter, you still cannot go into battle and think about saving face.

“Maybe someday, when I realize that I will not perform anymore, then I will fix everything as it was before.”

She added that she had considered botox but described how it would have been “impossible” to maintain the effect of injections in her cheeks and lips because of the punishing demands of training.