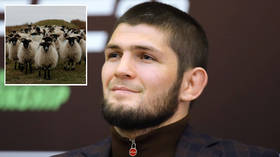 “They still owe me three sheep for your fight. The person who should give me the rams will explain everything to you. I bet three rams on your win, saying that you will not just win, but will dominate the fight,” Nurmagomedov told Ismailov.

Two months ago, Ismailov overcame a near-50-pound weight difference to defeat Emelianenko in their showdown at Absolute Championship Akhmat (AKA) 107 in the Russian Black Sea resort city of Sochi.

With that win, Ismailov extended an impressive 11-fight unbeaten streak stretching back to 2014, but hinted, however, he was close to the end his career after his remarkable fight against Emelianenko.

Stepping up from middleweight and giving away 49 pounds (22kg) to his rival, Ismailov nonetheless overpowered the 38-year-old Emelianenko across three rounds, before the referee finally stopped the action at 3 minutes and 25 seconds of the third round.