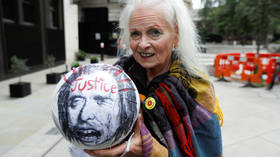 The eyes of the world have been on the latest stage in Assange’s legal battle to avoid being moved to the US this week, giving one of his most outspoken and colorful supporters another chance to take part in stunts and make her voice heard.

After giving a speech surrounded by protestors waving banners, the 79-year-old held up a football daubed with an illustration of Assange’s face and the word “justice” over his forehead.

“We had a goalpost,” began Westwood, explaining her football-inspired demonstration to RT while drums could be heard being beaten in the background.

“The courts, for ten years, have been playing football with his head.

“Every time they try to trap him, he scores the goal. They have no case whatsoever against him. They keep changing the law, inventing the rules, moving the goalposts and they still haven’t got it together.”

Assange faces a prison sentence of up to 175 years should he be sent to the US, whose Department of Justice will argue in court that he tried to recruit hackers to unearth classified government information.

Despite her vehement opposition to the charges, Westwood admitted she was not hopeful about his chances of ending up on the winning side.

“They will, nevertheless, because they’re so corrupt…it’s very likely that they will find him guilty,” she conceded.

“It doesn’t matter. This is what we face. He will forever be a shining light. He’s a hero, he’s an icon.“

‘The courts, for 10 years, have been playing football with Julian Assange’s head…they have no case whatsoever against him’-Fashion icon Vivienne Westwood to @FarhaanRT on the US extradition trial of @wikileaks’ Julian Assange WATCH HERE: https://t.co/NWbFMNtpqlpic.twitter.com/mKW5SnaelD

Westwood, who has previously taken part in demonstrations led by environmental action group Extinction Rebellion, predicted that Assange would be vindicated by a world imperiled by climate change.

“He’s shone a light on corruption and people – if they’re still alive, because we face mass extinction – will recognize him and his shining truth,” she insisted, adding that UK prime minister Boris Johnson and his government “don’t give a sh*t” about public opinion.

“[It] is changing in favor of Julian Assange,” she argued.

“They support him. There’s no case against him, it’s all invented. Even without a case, they will find him guilty, possibly.”

A grand jury in the US previously indicted Assange on 18 charges, 17 of which fall under the US Espionage Act. They include conspiracy to receive, obtaining and disclosing classified diplomatic and military documents.