Fans have turned on two sets of NFL players and coaching staff after they defended their actions in holding more protests during an NFL season opener, including a decision by the Houston Texans to shun the US national anthem. 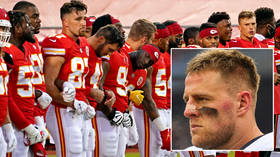 The Texans stayed in their locker room for the rendition of ‘The Star Spangled Banner’ before their game against the Kansas City Chiefs, leaving their opponents to hear the anthem and a performance by pop star Alicia Keys of ‘Lift Ev’ry Voice and Sing,’, the song known as the black national anthem that will be played before each NFL game during the first week of its return.

Some fans booed as the Chiefs headed back to their own locker room, and more jeers rang out as the players returned to the field to line up, link arms, watch social justice messages appear on the scoreboard and share a moment of silence dedicated to the fight for equality.

The Kansas City Chiefs and Houston Texans begin the 2020 NFL season with linked arms and a moment of silence for social justice.pic.twitter.com/XPupLFGqoC

“We get all the other stuff all the time on every other channel and football is supposed to be a nice escape,” said one viewer, tiring of the frequency of social justice protests that have included players kneeling before games and wearing shirts emblazoned with messages supporting the Black Lives Matter movement.

Another noted the irony of players and coaches condemning the boos at the Chiefs’ Arrowhead Stadium, adding that Colin Kaepernick, the civil rights activist and quarterback who originated the symbolic kneeling gesture in 2016, wanted the rights that the fans had exercised.

“The NFL players from Kaep onwards wanted the right to protest,” they ponted out. “But now people are going to whine because fans are booing in protest? Can’t have it both ways, man. This is how free speech works.”

You do so much for our community and I’ve always respected and admired you. It really hurts deeply that you have joined in the ranks of choosing to disrespect our Natl Anthem by refusing come out of the locker room during its playing. I will no longer watch or support the Texans!

Chiefs defensive end JJ Watt seemed confused by the reaction inside the stadium, where around 22 percent of the 76,000 capacity had been filled in the first game to take place during the pandemic.

“I didn’t fully understand that,” Watt said of the backlash after his side’s 34-20 defeat, calling the boos “unfortunate.” “There was no flag involved. There was nothing involved other than two teams coming together to show unity.”

Many watching at home were critical of Cale and both teams, accusing them of virtue signaling, showing a lack of patriotism and being unwise in their decision to bring politics on to the field of play.

“You do so much for our community and I’ve always respected and admired you,” one of the star’s following of more than 5.5 million on Twitter told him. “It really hurts deeply that you have joined in the ranks of choosing to disrespect our national anthem by refusing come out of the locker room during its playing. I will no longer watch or support the Texans.”

Another rued: “JJ Watt getting people out of here in the name of Black Lives Matter. What a time.”

Because we just want to watch you play football. That’s why people come to the games and tune in. We get all the other stuff all the time on every other channel and football is supposed to be a nice escape

Texans coach Bill O’Brien said that he had not heard the boos and could not father the reaction that he had been told about among some sections of the crowd, adding that the players’ decision was “a nice thing to do” and “a nice gesture.”

Watt’s coach, Andy Reid, called it a “neat deal” that aimed to “make us all a better, even stronger country.” “We have a chance to just be completely unstoppable when all hands join together, and that’s a beautiful thing,” he argued.

There is no reasonable explanation. People sit for 12 hours a day and watch football filled with beer commercials and dog food ads … but when the players link arms in unity and love for their fellow man for 5 minutes it’s a problem?

It’s not even about the flag anymore, people who booed are against unity between black and white people. They are the problem.

At some point ppl will realize that for a segment of the US. There will never be an acceptable form of protesting. They just don’t want to see it. No matter what is done.

Texans safety Justin Reid claimed the players were “done with empty gestures.” “We are very specific on what we’re trying to focus on when it comes to social justice, and that’s trying to fight for true justice for black and brown people being murdered by police when they’re unarmed,” he explained. “Going out for either anthem…would’ve been a distraction.”

Former Sports Illustrated Sportsperson of the Year Watt did not respond directly to the comments on Twitter, where he posted a remembrance message for the terrorist attacks of September 11 2001 on Friday and praised the nation’s “incredible show of unity” in the aftermath of the tragedy.