Fabricio Werdum scored a shock for the ages when he submitted the legendary Fedor Emelianeko a decade ago and now ‘Vai Cavalo’ has offered the fighter he describes as the ‘best of all time’ a second bite at the cherry. 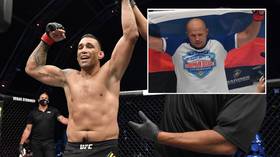 Brazilian heavyweight Werdum handed Fedor his first legitimate defeat in mixed martial arts competition some 33 fights after his first, submitting the Russian former PRIDE champion 69 seconds into the first round in an event under the Strikeforce banner.

It was one of the more monumental upsets in recent MMA history as the Russian sambo expert was forced to admit defeat to Werdum’s triangle choke but as both men approach the twilight of their careers, now may be the time for a do-over… Or so says Werdum, anyway.

“I want to fight with Fedor, 100 percent,” Werdum told the media on Fight Island following his submission win against Alexander Gustafsson. “I respect him a lot. I want to give to him an opportunity to fight with me again. This is history, you know? Me versus Fedor in 2010.

“Ten years later, everybody wants to see this fight. I don’t know where but for sure I want to fight with Fedor. I respect him, in my mind he is the best in the world.”

However, any renewed rivalries between the two men will almost certainly take place outside the UFC. Werdum’s victory on Saturday night was the final fight of his current contract with the organization and all indications suggest that the soon-to-be 43-year-old will test the free agency market.

Emelianenko currently represents Bellator MMA, whose chief Scott Coker has made several moves in recent years to snap up fighters when their UFC deals expire and could conceivably be interested in discussing terms with Werdum to arrange the rematch he desires.

Both Werdum and Fedor are regularly in the discussion, along with the likes of Stipe Miocic and Daniel Cormier, for the designation of the best heavyweight MMA fighter in history. Werdum’s stance, however, is a simple one: he appreciates the recognition, but there’s only one true candidate for that honor.

“Stipe Miocic is a very good fighter, he is the champion now but not all time, no. All time [best fighter]for me in my mind is Fedor.”

Share. Twitter Facebook Google+ Pinterest LinkedIn Tumblr Email
Previous Article‘Iron Mike’ Ditka blasts NFL kneeling protests, says those who disrespect national anthem should ‘get the hell out of the country’
Next Article Tennis ace Naomi Osaka tells fans to ‘stop creeping her out’ by demanding that she ‘maintains innocent image’