Tennis pin-up and part-time pop singer Dayana Yastremska has announced that she has split from coach Sascha Bajin – just two weeks after she questioned him for publicly congratulating his ex-player, Naomi Osaka, on beating her. 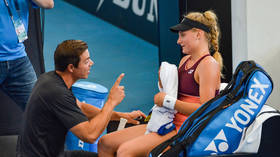 READ MORE: By showcasing their wokeness and pandering to Naomi Osaka’s one-woman strike, tennis bosses have set a dangerous precedent

Yastremska hired German Bajin less than a year ago and appeared to enjoy a close relationship with the long-term hitting partner of Serena Williams, balancing on his back as the 35-year-old performed push-ups shortly after they started working together.

I would like to announce that after the Us Open, I decided to stop my cooperation with Sasha Bajin. I want to thank him for everything and wish him a good luck! It was a good experience for me.💪🏼 pic.twitter.com/siDNJ1rc3W

Their relationship took a public turn for the worse after Yastremska’s round of 16 exit at the Cincinatti Masters a fortnight ago, when Bajin was generous in his praise for opponent Osaka, whom he coached to the 2018 US Open title and Australian Open glory the following January.

After Bajin called Osaka “the better player out there” and wished her luck for the rest of the warm-up tournament for the current US Open, Yastremska seemed hurt in her reply to both on Twitter.

Congratulations to @naomiosaka and her team. She was the better player out there today and good luck for the rest of the tournament. #CInCyTENNIS

I always thought that I remain the best player on the court in your eyes, even if I lose.

Of course you are. She was just better that day and we will try to get her next time 💪🏽💪🏽

no one needs a coach who doesn’t think they’re the best player on court!

“I always thought that I remain the best player on the court in your eyes, even if I lose,” Yastremska told him after a straight-sets defeat in which she won only four games.

Bajin appeared to backtrack by responding: “Of course you are. She was just better that day and we will try to get her next time.”

A shock second-round defeat in New York for Yastremska means Bajin will not have that chance. The number 19 seed failed to win a set again as she tumbled out at the hands of world number 84 Madison Brengle, signaling the final straw in her short alliance with her former coach.

“I would like to announce that after the US Open, I decided to stop my co-operation with Sasha Bajin,” the world number 25 told her following of almost 79,000 on Instagram.

“I want to thank him for everything and wish him good luck. It was a good experience for me.”

Bajin has been very active on his own social media during the US Open, showing fans inside the facilities during an extraordinary year for the Grand Slam as it keeps players inside a bubble in an attempt to protect them from the coronavirus pandemic.

The inaugural WTA coach of the year in 2018 will watch Williams take on another of his former hitting partners, Belarusian Victoria Azarenka, in the semi-finals.

He was also a hitting partner for former rankings leaders Sloane Stephens and Caroline Wozniacki and spent six months last year coaching Kristina Mladenovic, who claimed in January that Bajin “did not do any good thing for me” and “put me in a difficult situation”.

Something went wrong between them, not the perfect chemistry

Thats a mistake, letting a big ego getting in the way of your career.However, good luck !

You need a female coach (like Anabel Medina) that will understand you completely and then you will win a slam!

I’m wondering if it’s just that it didn’t work out or if there are financial reasons behind it too. Someone like Bajin can’t come cheap, and in a year like this and where she hasn’t had good results she might not have been able to afford him.

Mladenovic had previously admitted that she was “very disappointed” by his decision not to continue working with her at the end of the previous season, which he conceded had been a “selfish” move that he had made in his own interests.

Yastremska, who released an album in May and new single ‘Thousand of Me’ last month, received support for her announcement on social media.

“No-one needs a coach who doesn’t think they’re the best player on court,” said one fan, while another suggested: “You need a female coach who will understand you completely and then you will win a slam.”

An online critic told Yastremska that the split was a “mistake” and warned that she was “letting a big ego getting in the way of your career”.

Bajin did not offer an immediate reaction to the news on Twitter, where he has been directing followers to his lengthy question-and-answer Instagram sessions outside of the players’ bubble.