A college football coach was almost knocked out by a headbutt from one of his own players during an over-zealous celebration at a match on Saturday. 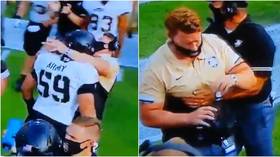 While headbutt celebrations have become commonplace in the National Football League and College Football, normally both parties have their grey matters protected by a polycarbonate shield.

This, unfortunately, was not the case when an Army Black Knights lineman mistakenly misread his coach’s attempt for a man hug after his team’s first down against the Cincinnati Bearcats, and planted a “love tap” squarely on his noggin.

Mike Vita, the Army fullbacks coach, was sent stumbling backwards, holding his forehead, while his concerned player, Mike Johnson, at least showed some remorse for his gung-ho gesture.

It certainly appears American football can be hazardous for one’s brain cells on and off the field!
Fans took to Twitter after watching the bizarre moment.

Another pointed out: “#59 out here trying to give his coach a concussion.”