Sweden legend Zlatan Ibrahimovic and the club he part-owns in his homeland could be charged by the country’s football association over reports that he breached coronavirus rules to speak to players while visiting from Italy. 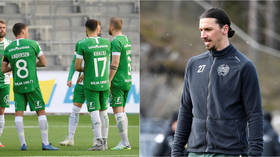 Ibrahimovic has returned to Sweden after suffering a suspected calf injury that his Serie A side, AC Milan, are assessing amid fears that it could keep him out for the remainder of the season.

Having initially claimed that the problem was minor when it was announced on May 26, Ibrahimovic was still in Stockholm almost three weeks later, courting characteristic controversy two days after watching Milan fail to score in a draw at Juventus that knocked them out of the Coppa Italia.

The 38-year-old’s local side, Hammarby, proved more successful in their opening match of the season on Sunday, beating Ostersunds 2-0 to move joint top of the early table in a win that evidently pleased Ibrahimovic.

Post-match accounts in the local press suggested that Sweden’s all-time top scorer, who has been linked with a move to the top-level side at the end of the season, went into the locker room to congratulate the Hammarby players on their win.

Swedish Elite Football protocols during the pandemic demand that “only players and coaches are allowed to stay in the changing rooms,” warning clubs that it is “important to minimize the number of people in all dressing rooms.”

The group’s general secretary, Mats Enquist, said that Ibrahimovic’s presence behind the scenes had been noted in the official match report and passed on to a disciplinary committee.

“It is very important that you do not make any moves that risk the spread of infection,” Enquist told Radio Sports. “I need to know more before I can say anything – we will discuss it with Hammarby.”

Ibrahimovic was rumored to have attracted the interest of the law on one of his last days in Sweden before he returned to training with Milan in mid-May, when he was pictured driving a luxury sports star around the streets that was believed to have been unregistered.

He has tweeted a picture of himself on a motorbike in the sun since his injury was announced, as well as posting promotional messages about Hammarby and a make of chewing gum he endorses, Mind the Gum, which claims to provide “concentration and mental energy” and help with “facing everyday challenges.”