Russian tennis ace Daniil Medvedev has made it into the US Open semifinal by outplaying long-time friend Andrey Rublev 7-6, 6-3, 7-6, and later admitted their childhood matches against each other didn’t go without smashed rackets. 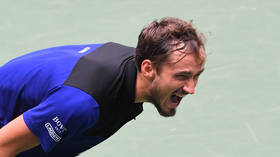 Third seed Medvedev, who took a solid straight sets win over his compatriot, said that during their childhood matches, the two would go “crazy on court”, often losing composure and throwing on-court tantrums which finally affected the results of their matches.

“In childhood we could really go crazy and lose matches because of that,” Medvedev said. “Now everything has changed. He was ready to fight for every point. Now we can’t behave in such a manner, we are playing at a high level,” the player added.

Medvedev vs Rublev at the #USOpen QFs 🇷🇺🔥 pic.twitter.com/2SOUE7gGWJ

Rublev also confirmed that the long-time rivalry with Medvedev was pretty tough with both players freely venting to their emotions.

“Both of us were crazy on court, destroying the rackets, complaining,” Rublev said. “What I remember from him, he was always one of the biggest fighters that I ever saw in my life since he was, I don’t know, seven years old, he could play lobs for maybe hours just to win.”

Medvedev will now face off against Austria’s Dominic Thiem for a place in the final, and the 24-year-old praised Rublev for the progress he has made over the past months, adding that he has evolved into a top-class player.

“He really progressed starting last year. I think he changed something in his mindset, in his game. Now he’s one of the best players in the world, only going up the rankings. I’m really happy for him,” Medvedev said.

Moscow-born Medvedev reached the final of last year’s US open where he was beaten by the Spanish tennis legend Rafael Nadal in a five-set thriller.

Now, in the absence of the tennis ‘Big Three’, Medvedev and Thiem are widely considered as favorities to clinch the title at Flushing Meadows with many pundits suggesting that the winner of their semi-final tie will lift the trophy this year.