Unbeaten boxer Ebanie Bridges, who is known as the ‘Blonde Bomber’, has described a critic as “sour” after selling a pair of her gym socks to a desperate fan who asked for the items to be sent in a “dirty and smelly” condition. 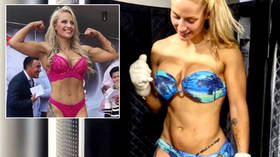 The unbeaten Australian described UK boxing fans as “the best” after selling the socks to a British supporter who had supposedly offered £500 (around $627) for the mucky memento from her training camp, judging the price to be right after receiving a string of lower offers from admirers keen to familiarize themselves with her intimate garments.

She admitted that there were “so many weirdos” on social media after a fan suggested that “men are f*cking weird” and revealed numerous other messages from bidders who had made her offers below $100 for various items of her clothing.

According to messages posted by Bridges, one man also sent her messages confessing to being “a bit of a loser” and offering to send money to her “for no reason at all and to get nothing in return.”

I’m a professsional boxer and a UK boxing fan has just paid me 500£ to send my dirty training socks to him in the UK. UK boxing fans are the best 🤣🤣 #NotMad#EasyMoney#GetEmWhileTheyreCheap 👀

Who needs #OnlyFans when you have dirty socks #JustSaying

Coronavirus turns prizefighters into thots… What a time to be alive. https://t.co/d4WaxMh4kJ

Looks like Covid has turned some people sour #HaveALaughMatehttps://t.co/B1XA57gmxn

After he purportedly begged her for a photo of her feet and promised to send her £500, the bantamweight replied: “No you won’t. We’ve been here before.”

When a critic claimed that “coronavirus turns prizefighters into thots”, Bridges hit back by accusing him of lacking “banter” and being “sour”, adding that she pitied his meanspiritedness when he called the bidders “creeps” and social media a “cesspool”.

“The weird thing is, I get way more sock requests than undies,” she said. “So f*cking strange. It’s a bargain if you ask me. I was disappointed they didn’t want me to sign them.

“There aren’t fights at the moment. Got to make coin somehow. I have a request inbox full of people interested in dirty socks, sweaty training gear and nude foot photos.”

After watching a video of English fighter Shannon Courtenay once revealing that she had been offered £10,000 ($12,540) for a pair of her socks, Bridges mocked adult content site OnlyFans by asking: “Who needs OnlyFans when you have dirty socks?”

It’s a bargain if u ask me

This is just today 🤣🤣🤣🤣🤣 pic.twitter.com/4myehJeru8

Fellow bantamweight and former World Championship gold medalist Michael Conlon joked that he would be willing to sell his “sh*t-stained Y-fronts” for around $50, with Bridges laughing: “Might send [the buyer]my boyfriend’s sh*t undies.”

The boxer and maths teacher described the buyer as a “poor c*nt in more ways than one” and told a fan who asked whether her students read her posts: “Definitely not. They don’t have Twitter.”

Bridges, who runs a health and wellness clinic including an oxygen chamber, infrared sauna and salt room, last week warned that “you can’t stop people from judging you and assuming things.”

“I’ll be the first to admit that when I got into boxing I wanted people to see I can fight and not judge me by looks,” she told her following of more than 17,000 on Instagram.

“I’ve felt like I’ve always had to prove myself but the more I’ve grown in the sport and met others around the world, the more I’ve realized it doesn’t really matter.

When he says hes into boxing, can have a banter and isn’t a lil bitch. 😏🤣 (Oh and likes cats…..) HAHA . . . #WeighInSnap #LovesABanter #Blonde #Boxer #Tattoo #GirlsWithTatts #BlondeBomber #LetsGo

Just finished my last recovery session @cryospaclinics before my fight on the weekend!. ▪️Cryotherapy ▪️Infrared Sauna ▪️Salt Therapy ▪️Chromotherapy . . Thank you Cryospa Clinic for aiding in my recovery and wellness during this fight camp! . Now to do what I do best and get the job done this weekend 🥊🥊🥊

“I have no problem or shame in embracing my looks and my personality, swearwords and all. Deep down I know I can fight and I know who I am.

“I love who I am and I wouldn’t want to hide my personality or change who I am just because I might be portrayed a certain way to people I couldn’t give two f*cks about.”

She has conceded that she is unlikely to be able to attempt to enhance her flawless four-fight record until the pandemic ends, although she is not the only fighter to seek an alternative source of income while sport remains partly suspended.

Belgian ex-UFC fighter Cindy Dandois revealed that she had started an OnlyFans account last month in an attempt to keep her MMA gym in business while its doors were closed.