Russian featherweight Zabit Magomedsharipov could soon get a shot at joining Khabib Nurmagomedov and Petr Yan as becoming a UFC champion, according to current 145lbs ruler Alexander ‘The Great’ Volkanovski. 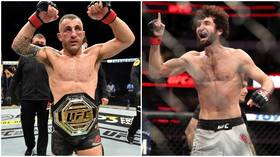 Volkanovski defended his featherweight title in a closely-contested rematch with Max Holloway earlier this month at UFC 251 on Fight Island, with attention now turning to who could be next up for the Australian.

Given the razor-thin nature of Volkanovski’s split decision win over Holloway – which was queried by those including UFC boss Dana White – there has been some clamor for a trilogy fight between the pair.

Volkanovski though does not see himself running it back with ‘Blessed’ again anytime soon, although he admitted he could see where the controversy comes from.

“I was quite surprised with the reaction to be honest, but watching back the tape, I can see where they’re coming from.

“Michael Bisping the commentator and the live stats and all that. But we’re comfortable we won the last two rounds so that’s all that matters,” Volkanovski told Sky Sports.

“(As for a third fight) not right now. I’ve just fought him back-to-back, comfortably won that first one probably five rounds to nothing, the last one was obviously close, I’ll give him that, but at the same time, to win two and then rematch and hold the division up again, it doesn’t really make sense.

“But in saying that, I’ll whoever the number contender is. If he comes back to that number one spot then he deserves it, I’ll be more than happy to do it.”

Turning to the men he sees as more immediate candidates for a shot at 145lbs gold, Volkanovski said there were several names in the hat – but that Russian striking sensation Zabit Magomedsharipov and ‘Korean Zombie’ Chan Sung Jung were the clearest frontrunners.

Magomedsharipov is unbeaten in six octagon outings, last picking up a unanimous decision victory against the dangerous Calvin Kattar at UFC Moscow last November. He is set to face the number five-ranked Yair Rodriguez in his next fight at the end of August.

A big win for either Zabit or Jung could set them up for a title shot later this year, Volkanovski said.

“We’ve got probably four guys in the same boat, they’re probably one win away from being the number one contender,” said the Aussie.

“They’re just there, they need to have that one fight and then everyone’s going to be screaming their name.

“I’m just going to soak up the win and let the division play out, and then hopefully by the end of the year that’s happened and they’ve got that number one contender.

“But right now there’s a couple of frontrunners, there’s Zombie and Zabit, they’re probably the frontrunners, if they get a win they’ll be the clear number one contenders and I’ll look forward to taking them on,” Volkanovski added.