A HOST of new gadgets and subscription services were unveiled at a special Apple event tonight.

Normally Apple uses the September showcase to unveil a new iPhone, but the launch has been delayed this year.

The pared-down Apple Watch SE (£329) was also revealed tonight along with the more powerful Series 6, which comes with a host of health and fitness features.

Fitness+ is a new subscription service that gives you personalised training videos for £9.99 a month and a new Apple One subscription bundles in all of the firm’s services for £29.95 a month.

Meanwhile, Apple’s next big iOS 14 update for your iPhone drops on Wednesday, September 15.

Missed everything? Here’s what Apple revealed…

Apple’s retail prices for British buyers are trickling in.

For the Apple One subscription, you’ll pay £14.95 for an individual membership and £19.95 for a family plan.

And that rises to £29.95 if you want the full-whack Premier subscription.

However, anyone can get a free trial for one month.

But if you want the cellular model, it’ll cost you a higher £479 instead.

The cheaper Apple Watch SE starts at £269 in the UK.

The new iPad (8th generation) is available to order right now for £329.

Meanwhile, the cellular model is costlier at £459.

Finally, the new iPad Air costs £579 for the base model.

And the cellular edition is significantly pricier at £709.

Those are all the announcements, which means – as expected – the iPhone 12 was a no-show.

Apple didn’t even hint at a date, though we can take a guess.

The new iPad Air will come running the A14 chip, which will likely power the iPhone 12.

And that tablet will launch in early October, which may be a clue that the iPhone will arrive in short order.

Expect early October for an iPhone announcement, if we were to guess.

UPDATE FOR YOUR IPHONE!

Hey, looks like iPhone did get a mention after all.

Here’s a graphic to remind you of what that entails… 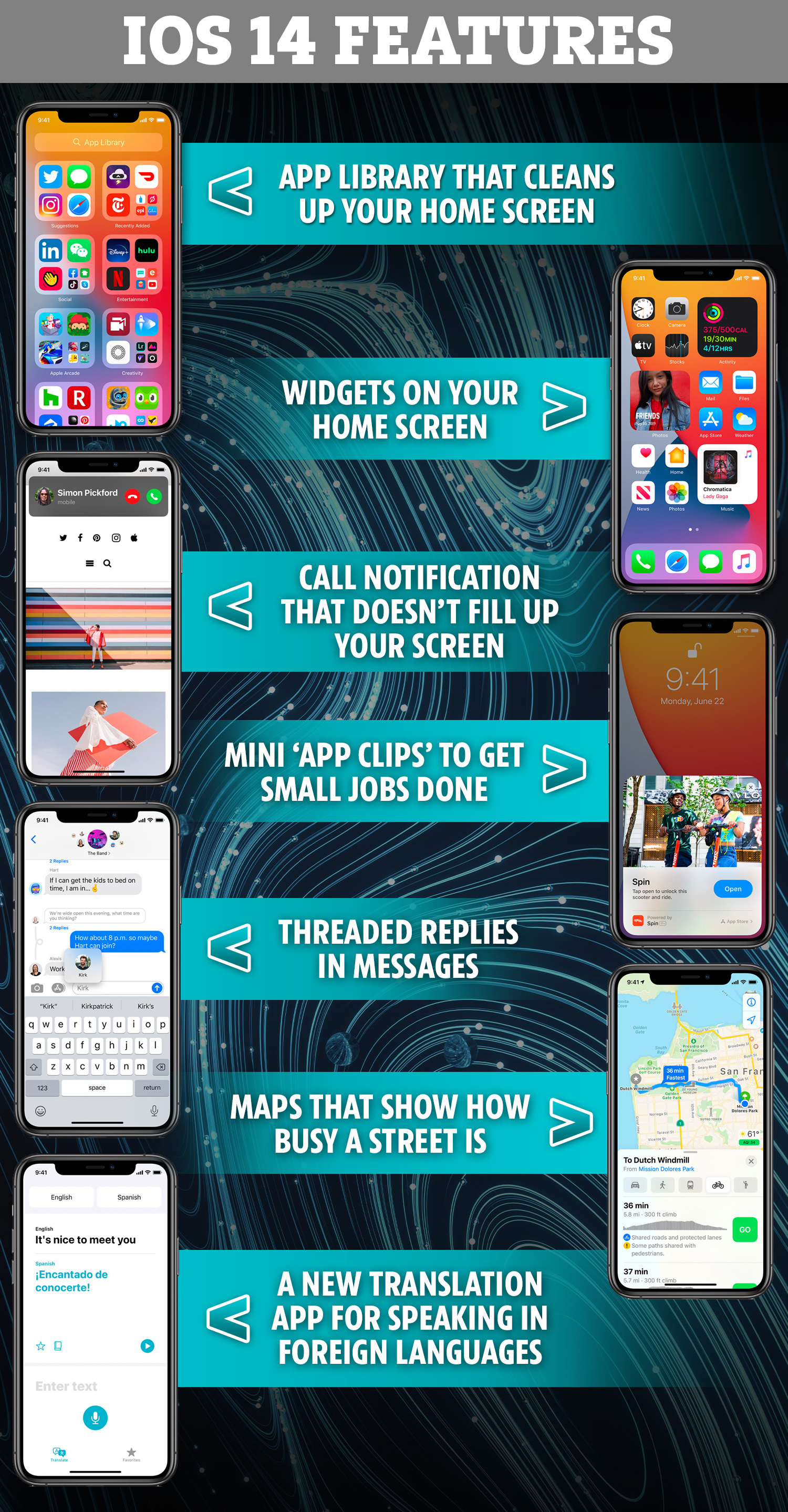 The new iPad Air starts at $599, though the price will rise for cellular and higher-storage models.

We don’t have exact launch details yet, but Apple said the new iPad Air will be out “beginning next month”.

That means it could launch alongside the rumoured iPhone 12.

The new iPad Air can shoot 4K video, and there’s a redesigned stereo speaker system that works in portrait and landscape mode.

Apple’s tablet works with the Apple Pencil, which now attaches magnetically to the side – like the iPad Pro.

It’s some serious power, and will likely draw many buyers away from the iPad Pro.

And if nothing else, the new colour options look pretty great… 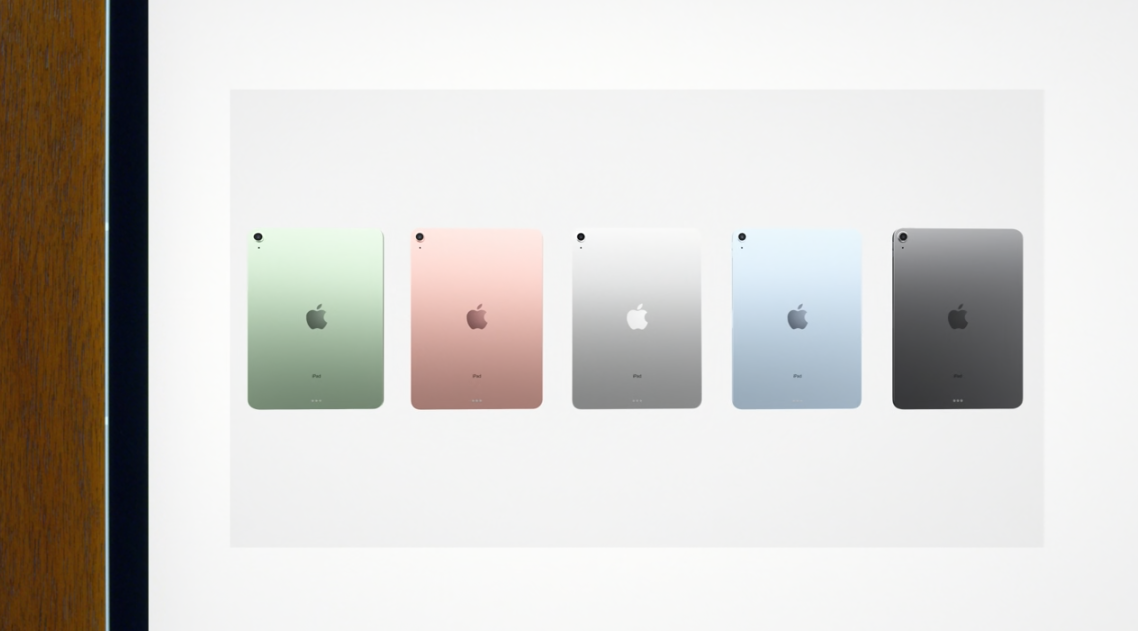 Geeks will be excited to know that the iPad Air runs on the A14 Bionic chip.

This is the first Apple device to feature this top-end chip.

It’s the industry-first chip to use a breakthrough 5nm process – which is the distance between transistors. More transistors means more computing potential.

There are 11.8billion transistors in the A14 chip, which is a boost of 40% over the previous chip.

A version of this chip is likely destined to feature in the new iPhone 12, whenever that may be announced.

The CPU is reportedly 40% faster than the chip in the old iPad Air, with a 30% increase in graphics performance than the old chip.

And Apple says it’s very power-efficient to boot. What’s not to love?

Yes, just like the rumours foretold, there’s another new iPad.

This time it’s the new iPad Air, with a totally revamped design.

Apple fans will notice it’s similar to the iPad Pro, with no Home button and a massive screen.

There’s a sharp resolution with 3.8million pixels across the display.

And it comes in five colours, including a pale blue!

Apple has created a next-gen Touch ID that’s integrated into the top button (the one that locks the screen). 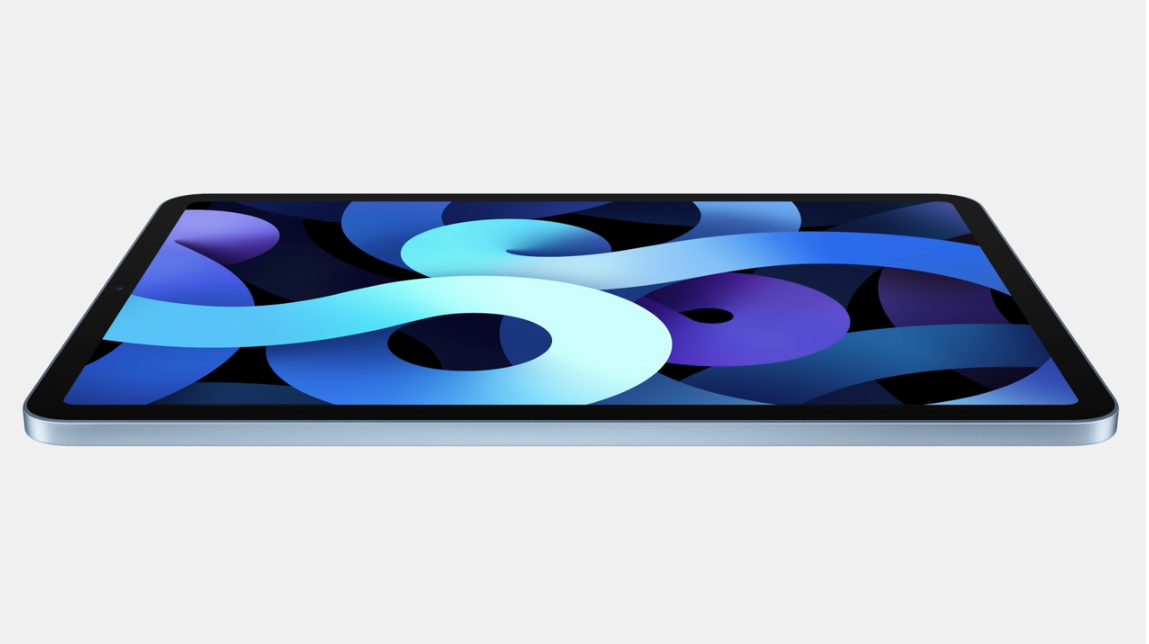 And if you’re an Apple Education customer, you’ll get it for $299.

You can order it today, with shipping on Friday.

As you’d expect, the 8th-gen iPad works with the Apple Pencil.

It means artists have a cheap option for bagging one of the creative industry’s favourite tools.

But it’s also a cheap way to get a great smart doodling device for taking notes and whatnot. Students, Apple is looking at you.

There’s a new iPad, which is the 8th generation.

It’s powered by the Apple A12 Bionic chip, which is a far speedier processor than the current model. 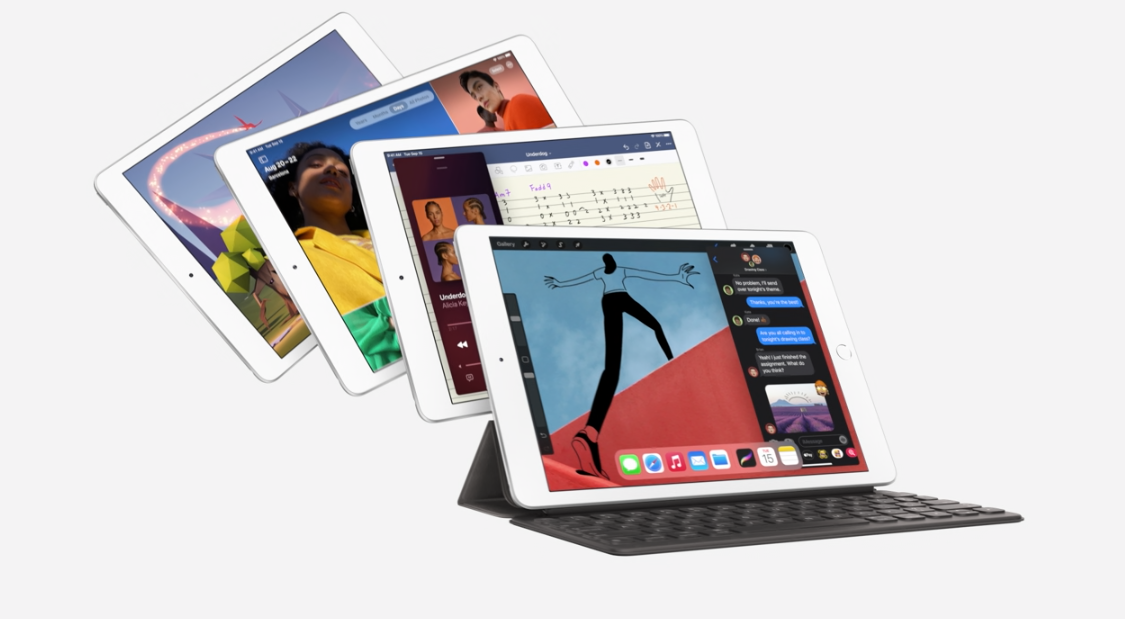 As rumoured, there’s a new Apple One subscription service.

There’s an individual plan with Music, TV+ and Arcade plus 50GB of iCloud for $14.95 per month.

Or you can get Premier with all of the Apple services wrapped in for $29.95 a month.

THE COST OF GOOD HEALTH?

And you can share with five other family members for no additional charge.

It’s coming before the end of the year, and will be available in the UK and US.

If you buy a new Apple Watch, you’ll get three months of the service for free.

Another subscription! You can now get Apple Fitness+, which is designed for health fanatics.

The app lets you choose custom-made workouts from a catalogue of videos on iPhone, iPad or Apple TV.

When you start the video, it automatically starts the correct workout on your Apple Watch.

And you’ll see your exercise metrics on the screen in front of you.

When the workout is over, you’ll get a summary of how you’ve done.

You can do the workouts with any brand of equipment, and typically require no equipment – or a set of dumbbells.

Apple wants you to do these workouts at home, at the gym, while travelling and more. 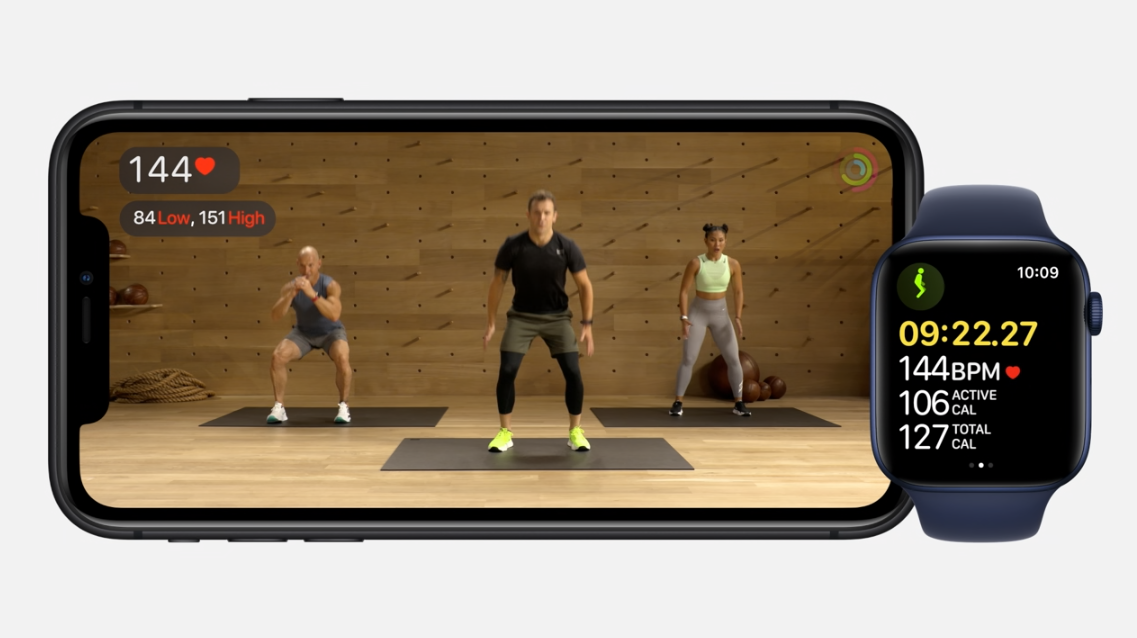 You can order both new Apple Watches today.

But they won’t start shipping or turn up in stores until Friday. 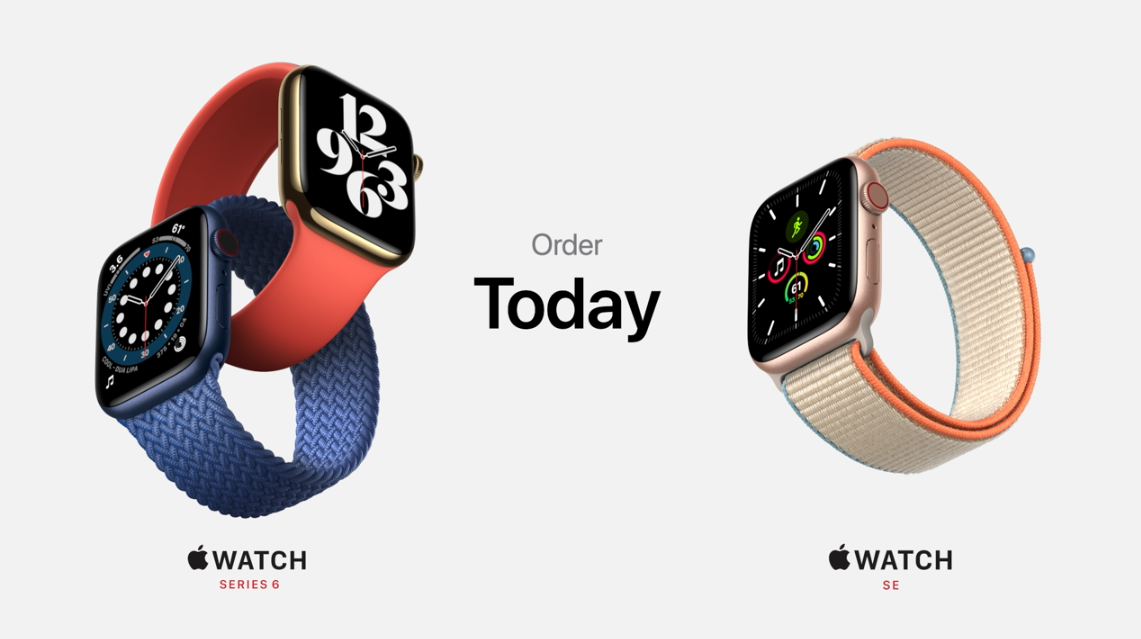 THE PRICE IS RIGHT!

And the Apple Watch SE is $279, though it’s also available on a $12-per-month payment plan.

It’s fairly predictable pricing, and both models are likely to sell like hot-cakes.

Looks like there’s a SECOND Apple Watch, as expected.

This new Apple Watch SE is a more budget-friendly Apple Watch, lacking some of the features of the Series 6.

It runs on the Apple S5 chip, making it significantly faster than the Apple Watch Series 3.

And it’s got plenty of great features, including a gyroscope and compass.

It also supports Fall Detection, which is will alert someone if you trip over and can’t get back up. 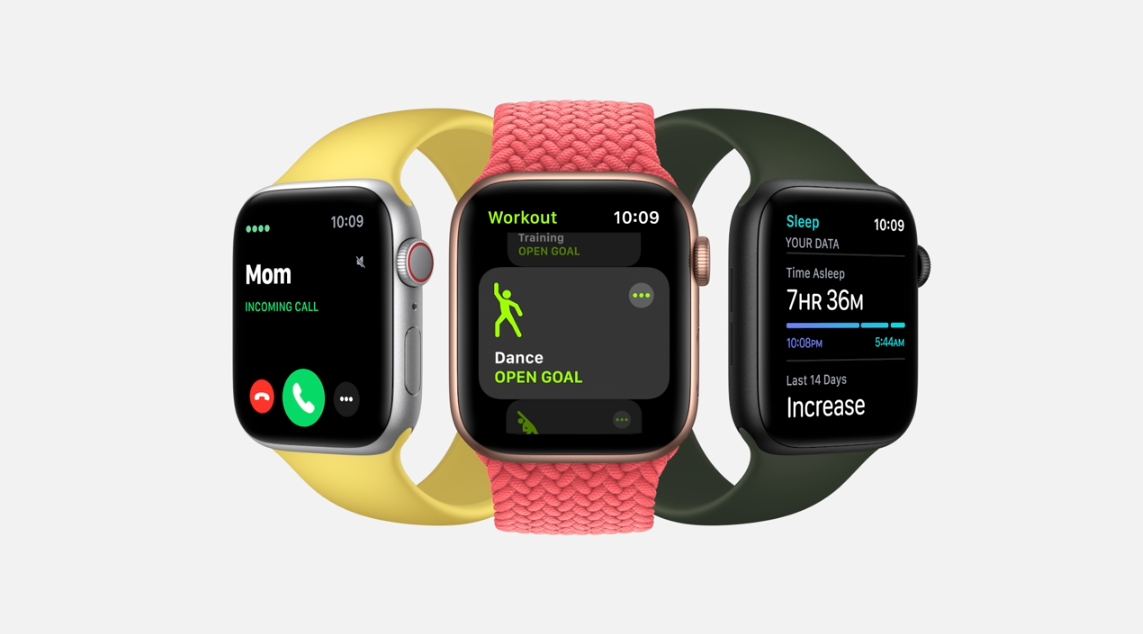 FUN FOR THE WHOLE FAMILY

Apple is finally making it possible to let people use an Apple Watch without owning an iPhone.

It’s designed for families with children or elderly people, who might not have an iPhone but want a watch.

You can now set these secondary Apple Watch units up using your own iPhone through ‘Family Setup’.

So there still needs to be at least one iPhone in the family.

And you’ll need a cellular model of Apple Watch Series 4 or later.

Apple Watch fans will be pleased to hear there’s a new strap called the Solo Loop.

It comes in silicone and braided styles, and it looks…pretty good?

Apple’s Jeff says it’s the most comfortable strap yet, but we’ll have to test that claim ourselves. 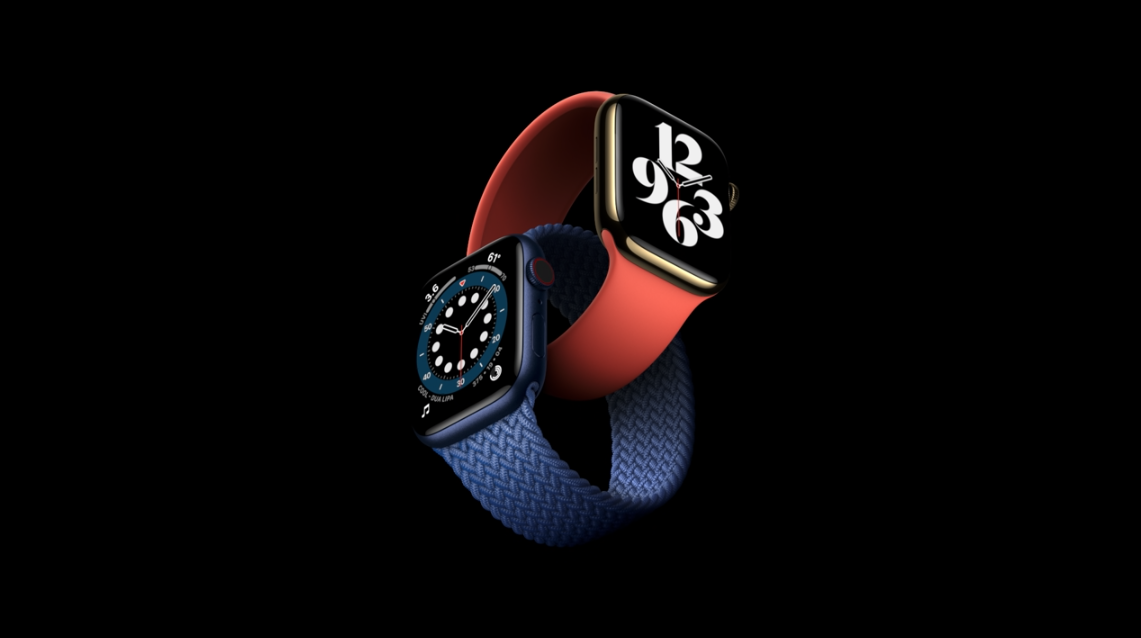 But the most exciting new watch face is the Memoji face, which puts your own animated emoji on your wrist.

Developers can also make their own faces, with examples including faces for surfing or photography. 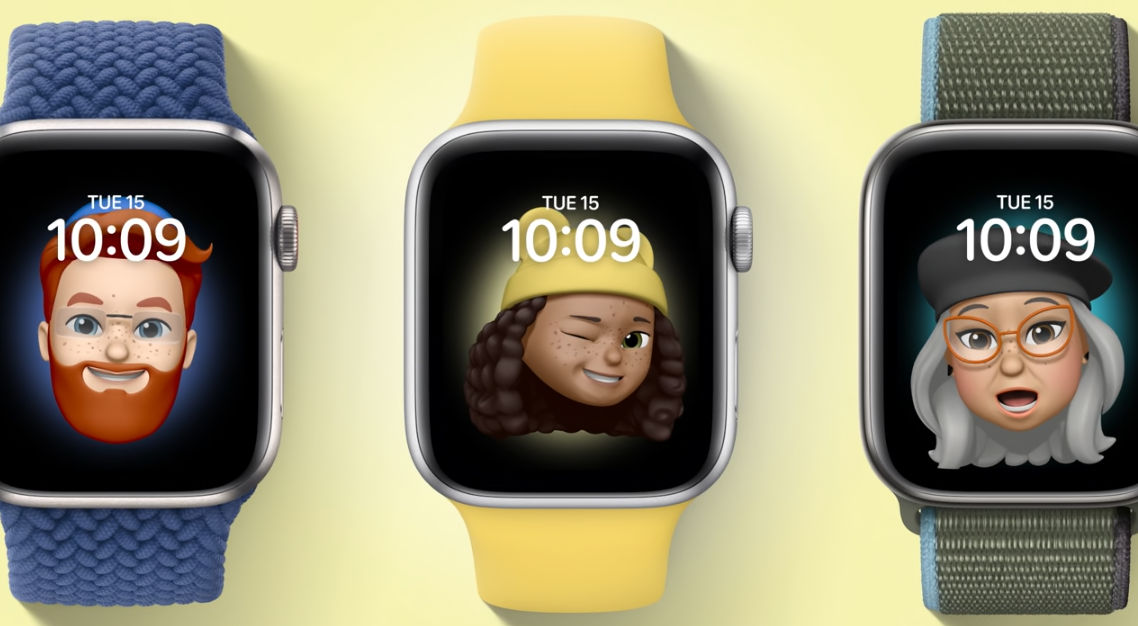 The Apple Watch Series 6 has a brand new S6 chip, based on the iPhone’s A13 processor.

That should let it run more powerful apps, and hopefully improve battery life too.

Apple says that the Always On display is 2.5x brighter outdoors, thanks to the chip.

And there’s a continuous altimeter, which will let you see your elevation change on a hike in real-time.

As mentioned before, you’ll be able to take your blood oxygen levels too – which is important when hiking in high places.

The headline feature is the fact that you can now measure blood oxygen levels.

It shines red and infrared light onto your wrist, letting you make sure you’re not dipping too low.

SPO2, or blood-oxygen saturation, is a vital sign – a key measurement with critical info about your current health.

The Apple Watch will take readings in just 15 seconds, as well as taking period measurements throughout the day.

There’s a new Blood Oxygen app on the Apple Watch Series 6, making it easy to check.

It’s official: the Apple Watch Series 6 has been announced.

And it comes in new colours, included a blue aluminium case and Apple’s ProductRED. 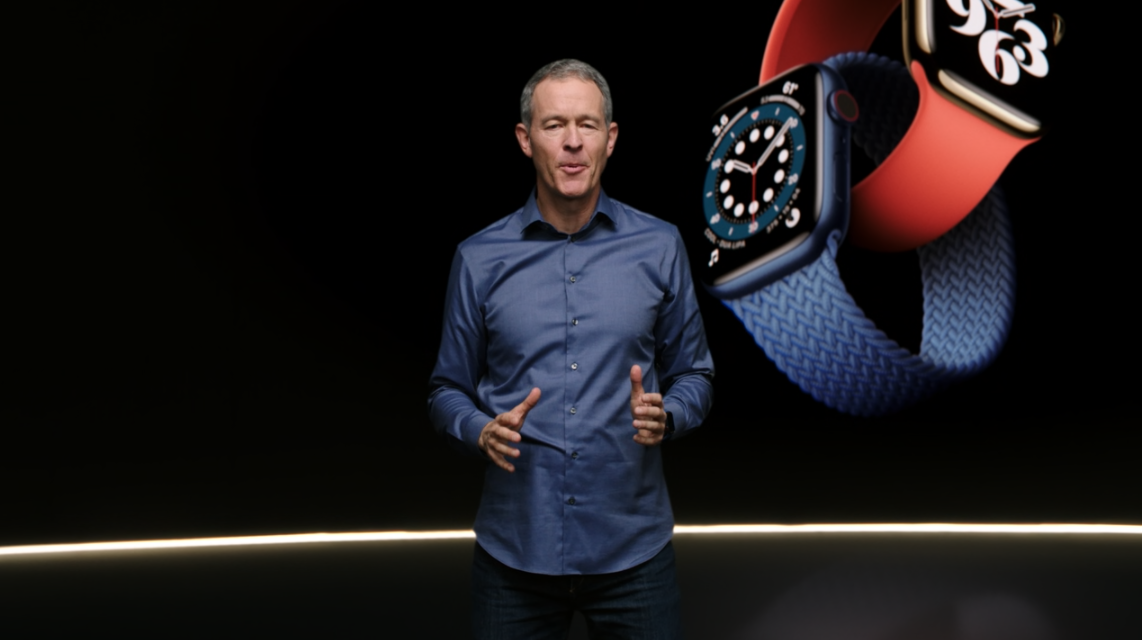 It’s the next-gen software that will be available on the Apple Watch 6 – and other recent models.

There are new watch faces that can be shared with pals.

And Apple has finally added sleep tracking, monitoring micro-movements through your watch’s accelerometer.

There’s automatic hand washing detection, which reminds you to keep scrubbing for at least 20 seconds.

And new workout types have been added, including Core Training, Dance, Functional Strength Training and Cooldown.

Apple’s smartwatches are expensive, but they can make a huge difference on the lives of some people.

The Apple chief discussed people whose lives had been saved by the Apple Watch – a recurring theme thanks to heart defect detection and fall detection.

Tim also showed off Enrique from Spain, a blind man whose Apple Watch is an essential part of his life.

It’s important to remember that despite the price, for some people the Apple Watch is invaluable. 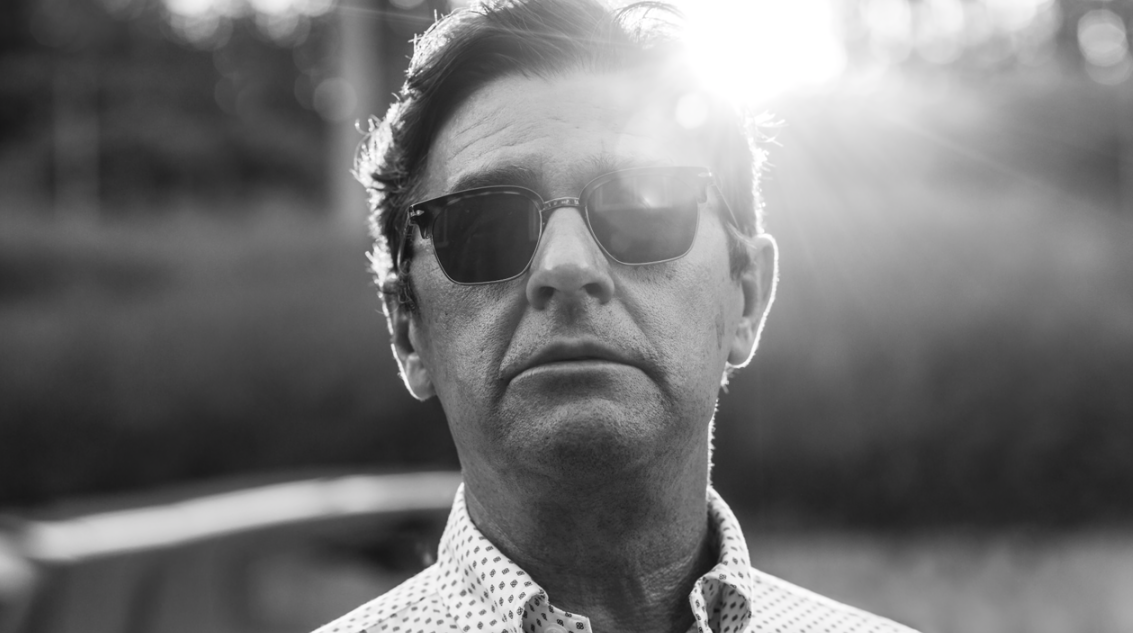