The announcement comes as part of the Government’s ‘Living with Covid’ plan.

FANS WILL BE allowed again to attend sporting events around the country following the announcement today of the Government’s ‘Living with Covid’ plan.

From tomorrow, 200 spectators will be permitted into venues which would usually have the capacity to host crowds of 5,000 or more as Ireland is currently Level Two in terms of restrictions.

However, that number is 100 for Dublin as the capital has been given additional measures.

Smaller grounds around the country will be able to admit 100 people, while 50 patrons can attend indoor events.

Progression to Level One would see up to 500 people allowed into 5,000-capacity stadia, 200 permitted for smaller venues and 100 at events taking place indoors.

The decision is a major boost for sporting organisations around the country after all such events had moved behind closed doors four weeks ago.

The FAI, GAA and IRFU responded to this morning’s announcement by setting up a working group, chaired by Aviva Stadium stadium director Martin Murphy, to develop a common set of protocols to facilitate the safe return of spectators.

“Spectators are more than fans,” Murphy said. “They are an intrinsic part of any sporting occasion; they are the family and friends of the men and women who are representing their town, their county, their province or their country. They are part of the sporting culture of our nation which is so critically important to our overall wellbeing.”

Spectators had been prohibited to attend fixtures since the restrictions were introduced last month, previously 200 people were permitted to go to outdoor sporting events with that number including team management, players and match officials.

Thursday night’s game between Shamrock Rovers and AC Milan in the Europa League at Tallaght Stadium will still be played behind closed doors following a ruling from Uefa in July.

The governing body ruled that all Uefa-sanctioned games should take place with no fans present as the rules around attendance at mass gatherings and sporting events differ across Europe.

In rugby Leinster are playing at the Aviva Stadium in the Champions Cup quarter-final against Saracens on Saturday.

GAA action around the country continues to intensify this weekend with some high-profile county senior finals on the agenda with Limerick and Tipperary in hurling, and then Mayo and Tyrone in football. 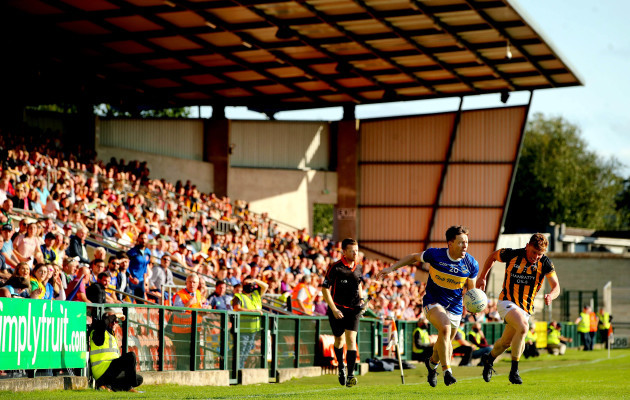 Supporters have already been permitted to attend GAA games in the six counties due to a different Stormont directive with the Ulster Council having made the decision to allow up to 400 to attend a match.