The death of 103-year-old Dame Vera was announced by her family earlier today.

DAME VERA LYNN has been remembered as a “patriotic woman and genuine icon” following her death aged 103.

The singer, who entertained troops with morale-boosting visits to the front line during the Second World War, died surrounded by her close family.

Her family said in a statement they were “deeply saddened to announce the passing of one of Britain’s best-loved entertainers at the age of 103”.

The Queen is to send a private message of condolence to Dame Vera’s family, Buckingham Palace said.

Sir Cliff said: “Dame Vera Lynn was truly an icon. She was held in such high esteem and my best, and favourite, memory was sharing a performance with her in front of Buckingham Palace for the VE Day celebrations in 1995.

“We walked to the stage through a crowd of survivors of that war, and they were reaching out to touch and get a smile from Vera. I heard the words … ‘God bless you’ … ‘Thank you’ … ‘We love you’ for their very own Forces’ Sweetheart! A great singer, a patriotic woman and a genuine icon.

I am happy to use the words called out on the wonderful day. Vera, thank you, God bless you, and I loved you too. Rest in a very deserved peace.

Johnson said her “charm and magical voice entranced and uplifted our country in some of our darkest hours. Her voice will live on to lift the hearts of generations to come”.

Jenkins, who recently recorded a duet of We’ll Meet Again with Dame Vera, with proceeds going to NHS Charities Together, described the 103-year-old as “an icon. A legend. An inspiration. My mentor and my friend”.

She added: “I simply cannot find the words to explain just how much I adored this wonderful lady.

Her voice brought comfort to millions in their darkest hours, her songs filled the nation’s hearts with hope, and her emotive performances, whether home or abroad, then or now, helped to get us through.

“It was she who chose the sentiments of her songs – she knew instinctively what people needed to hear, how to rally the morale and her spirit and strength created the soundtrack of a generation.

“There will never be another Dame Vera Lynn. Forces’ Sweetheart and our sweetheart. I will miss you greatly and I know we’ll meet again some sunny day.”

Dame Vera’s death will also be marked with a special tribute programme to be aired on BBC One tomorrow night.

The corporation’s outgoing director-general Tony Hall announced the programme in a statement as he paid tribute to Dame Vera.

Lord Hall said: “What sad news. Not only was she dear to many, she was a symbol of hope during the war and is a part of our national story. She appeared on the BBC many times and had her own variety show in the 1960s and early 70s.

“She demonstrated how music and entertainment can bring joy in the most challenging times. Something that will resonate with many people today.”

The BBC said the programme would be a tribute to celebrate Dame Vera’s life.

It added: “With footage first recorded to celebrate her 100th birthday and a new introduction by her daughter Virginia, it includes exclusive access to Dame Vera as she watches home movies and videos from the past with her daughter.” 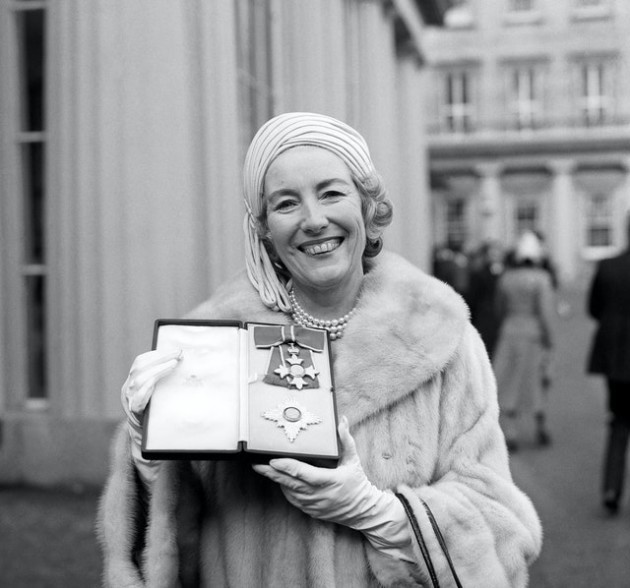 Outside Buckingham Palace after being made a dame in 1975

Earlier this year, ahead of the 75th anniversary of VE Day, Dame Vera spoke of remembering “the brave boys and what they sacrificed for us”.

The Queen referenced the title of one of Dame Vera’s most beloved wartime songs when she told the country, separated from families and friends during the coronavirus lockdown: “We will meet again.”

She was also fondly remembered for singing The White Cliffs Of Dover, There’ll Always Be An England, I’ll Be Seeing You, Wishing and If Only I Had Wings, to help raise British spirits during the Blitz.

“My songs reminded the boys of what they were really fighting for,” she once said. “Precious, personal things, rather than ideologies and theories.”

Dame Vera later had her own television show and toured the world.

She remained an outspoken supporter of military veterans throughout her life.

She performed for troops during the war, often at great personal risk, in countries including Egypt, India and Burma.

In May this year, Dame Vera became the oldest artist to score a top 40 album in the UK.

The 103-year-old saw her greatest hits album 100 re-enter the chart at number 30, boosted by commemorations for the 75th anniversary of VE day on May 8.

Her daughter, Virginia Lewis-Jones, hailed her mother’s charity work and the difference she had made, referencing one charity in particular which had “a very special place in her heart”.

The late singer was the founder and president of the Dame Vera Lynn Children’s Charity, which helps young children with cerebral palsy and other motor learning difficulties to “get the best possible start to life”.

Lewis-Jones, the charity’s vice president, said her mother made a difference to the lives of many families.

She said: “Although my mother was closely associated with other charities, not least those supporting veterans, the Dame Vera Lynn Children’s Charity always held a very special place in her heart – the children loved her as much as she loved them, and I’m extremely proud of what it has achieved and the difference it has made to so many families’ lives.”

Dame Vera was recognised for her services to entertainment and charity in 2016 after being made a Member of the Order of the Companions of Honour in the Queen’s Birthday Honours.

Her family said that further information regarding a memorial service would be announced at a later date.