Let coaches know how much they’re appreciated, because the importance of participation in sport for young people has never been more clear.

CURIOSITY GOT THE best of me while out for a walk earlier this week.

Fellow parents will probably know the type of walk I’m referring to; the aimlessly wandering type, when your sole intention is to buy a few more minutes of silence before the dormant demon in the buggy wakes to demand attention and banana rice cakes.

Making my way up a pockmarked laneway that I hadn’t seen in over 20 years, I soon laid eyes on the old secondary school GAA pitch.

Memories came flooding back. All that was missing was the booming voice of Brother Patrick Fitzgibbon, beckoning us towards the field in an effort to get a training session going before the dying of the light.

With a few words of encouragement, Brother Pa could make you feel like the reincarnation of Christy Ring. His powers of motivation were helpful to me before one game in particular.

The opponents were St Flannan’s, the famed Ennis hurling nursery, about whom there was an air of invincibility at the time. If they were the New England Patriots of Munster schools hurling, Jamesie O’Connor was Bill Belichick and any number of fellas were capable of filling the Tom Brady role.

I had the misfortune of being in direct opposition to one of them, Andrew Quinn, who went on to play for Clare against Kilkenny in an All-Ireland senior hurling final a few years later.

Quinn already had a reputation as a guy with the potential to play at the highest level. I was rated as a future star too, but my mother never got the recognition she deserved for the quality of her hurling analysis.

Although it was merely a challenge match, my stomach was doing somersaults as we gathered to board the bus. I knew I was out of my depth going head-to-head with a player of his calibre.

Learn from the best with How To At Dominoes, our coaching podcast with Shane Keegan. Check out Members.the42.ie for details.

Recognising that I was a nervous wreck, however, Brother Pa was on hand with a confidence-boosting sermon that took the edge off the journey.

An inherently noble man, Brother Pa should have been the next Pope as a reward for the amount of codology he had to put up with while performing the thankless task of trying to turn us into a half-decent team.

When the results were good, he’d put his hand in his pocket to pay for burgers and chips for the panel of players (nutrition hadn’t been invented yet).

Seeing the school pitch again this week sent me down a rabbit hole of recollections of former coaches and mentors who facilitated the making of memories that I can only hope will always remain vivid.

Basking in the warm glow of nostalgia that took the chill out of an October afternoon, it was a reminder of the extent to which my life was shaped by people who gave so generously of their time. 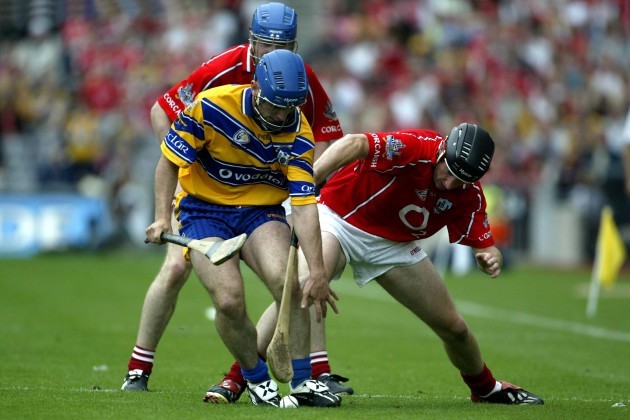 Andrew Quinn of Clare wins the ball over Cork’s John Gardiner in 2005.

To this day, my closest friends are lads with whom I bonded at the age of six over a shared passion for battering tyres with a hurley on Saturday mornings, before refuelling with Cadet cola and Macaroon bars.

Hurling always took precedence, but it was soccer that first exposed me to competitive sport.

John Fitzgerald made every game in the U8 Cork Schoolboys League feel like an FA Cup final. Mark Coughlan sacrificed his Friday nights for the benefit of a group of Eric Cantona wannabes who thought they had it all figured out.

Tucked away in a box somewhere in the family home are a few club hurling medals that wouldn’t be there if it weren’t for Pat O’Neill, whose efforts ensured that we experienced more success as a team than our talents deserved.

Pat had been a bit of a warrior during his own playing career, and legend had it that his limbs were held together by titanium. When he stood in goal for some shooting practice at training and a ‘PING!” echoed around the pitch, the propagators of the myth insisted that the sliotar had struck his shin, and not the post.

There was also the cantankerous Pat Roche, the man with the hurleys, whose car boot was a treasure trove of ash. The quality of the stick you were given generally correlated with the mood he was in.

Some years later in London, the inimitable Martin Carroll fielded a team of misfits for whom hurling too often got in the way of social gatherings at The Swan in Stockwell.

After I dislocated a kneecap during a championship semi-final, the physio called Carroll on to relay the prognosis.

There are countless others I could mention who are also remembered fondly. Several are sadly no longer with us, but I’d like to think that they didn’t pass away without an understanding of how many lives they impacted so positively.

Getting involved with a team at any level is no small commitment, particularly when work and family duties are factored in. Take it from someone whose definition of a productive evening hinges on whether the dishwasher has been packed or not.

Over the next few weeks – but hopefully not months – as boots and helmets gather dust under the stairs and in the shed, keep in mind the volunteers who are the lifeblood of the nation’s sporting anatomy. Without them, this temporary void would be a constant.

After normal service eventually resumes, take the opportunity to let them know how much they’re appreciated, because the importance of participation in sport for young people has never been illustrated as clearly as during these troubling times.

When the restrictions are lifted and parks and pitches around the country can come alive again, the volunteers will be first on the scene, lining the grass, hanging the nets and unlocking the dressing rooms.

For many, they paved the way for professional careers and success at elite levels. For most, their contribution still elicits joy from sentimental saps decades later.

And as for that game against St Flannan’s? I didn’t puck a ball and was taken out of harm’s way at half-time.

Brother Pa was a motivator, not a miracle worker.

Getting involved with a team at any level is a big commitment.
Share. Twitter Facebook Google+ Pinterest LinkedIn Tumblr Email
Previous ArticleEuroLeague: Bayern come back 20 down to beat Fenerbahce
Next Article Freezing cold war: militaries move in as Arctic ice retreats – photo essay