After months of hearing that President Donald Trump must be impeached because “no one is above the law,” America found out that this talking point doesn’t actually apply to Democrats such as ex-FBI deputy director Andy McCabe. 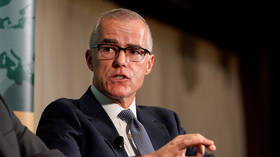 As his lawyers triumphantly announced on Friday, the Department of Justice decided not to press criminal charges against McCabe “after careful consideration” of the inspector-general’s report that said he lied to investigators and leaked to the media.

“Based on the totality of the circumstances and all of the information known to the Government at this time, we consider the matter closed,” said the DOJ letter. It sent waves of glee through the ‘Resistance’ establishment, which set up and propagated for years the ‘Russiagate’ hysteria aimed at removing Trump from office.

One of the people who cheered “Andy” was Lisa Page, the FBI lawyer who famously discussed an “insurance policy” in case Trump gets elected in McCabe’s office with agent Peter Strzok, with whom she was carrying on an extramarital affair. Strzok, Page and McCabe’s fingerprints are all over the FISA scandal – in which the FBI spied on Trump’s campaign, fishing for dirt to tie him to Russia.

Though he was fired from the FBI, McCabe was hired by CNN back in August, joining former CIA Director John Brennan and former Director of National Intelligence James Clapper – two other ‘Russiagate’ pushers – in the lucrative land of political punditry.

In fact, precisely zero people involved with setting up and conducting the three-year “witch hunt” of Trump – unprecedented in the history of the American republic, by any measure – have suffered any adverse consequences for it. Even Michael Avenatti – the sleazy lawyer who has apparently defrauded and embezzled multiple clients in pursuit of political ambition – has only been convicted of attempting to extort Nike, rather than, say, lying to the Senate during the confirmation of Justice Kavanaugh.

Compare that to how anyone even remotely associated with Trump has been treated by the long arm of the law. Former campaign manager Paul Manafort was imprisoned over matters entirely unrelated to the 2016 election. Trump’s first national security adviser, General Michael Flynn, was fired after just two weeks on the job and bullied into pleading guilty for “lying to FBI agents” (one of whom turned out to be Strzok) – which he is now contesting. Campaign aide George Papadopoulos went to jail because he made a remark about Hillary Clinton’s private email server that was used to claim Trump was “colluding” with Russia. Political operative Roger Stone is currently facing the possibility of dying in prison for tripping into a perjury trap.

Trump has done little or nothing to help any of his former staff or associates. Admittedly, Democrats and the media both shrieked “abuse of power” when he merely tweeted about Stone’s proposed sentence being too harsh – showing once again that it’s never about the what, only about the who/whom.

Having come to Washington on a promise to “drain the swamp,” Trump has instead meekly submitted to the very same swamp’s endless lawfare. Yet that kind of restraint has not stopped his critics from declaring him a fascist, tyrant and dictator. In fact, the more he let them off the hook, the more they shrieked about how he seeks to subvert justice!

The case of Andrew McCabe – and his boss Jim Comey before him – is the perfect illustration that there are people effectively above the law. That there are in fact two sets of laws in America: one for Trump’s enemies, who have gotten away with a coup, and another for the “deplorables” who got punished for supporting him.

Justice must not only be done, it must be seen to be done. There is a point at which restraint turns into stupid magnanimity.

On more than one occasion, Trump has used ‘Game of Thrones’ memes. If he actually watched the show from the beginning, he might remember that Ned Stark’s naivete about the impartiality of King’s Landing law enforcement ended with his head on a pike outside the Red Keep.