Tania Khalil was in Beirut when the blast happened on 4 August.

Concern Worldwide’s Tania Khalil was in Beirut when a massive chemical explosion ripped through the heart of the Lebanese capital earlier this month.

Over 150 people were killed and 6,000 injured in the giant blast which originated in the city’s port. It was caused by a fire near a vast store of ammonium nitrate that had been allowed to rot for years in a warehouse at the site.

Here, Tania recalls what happened on the day, how she worried for the safety of her family and why it changed her life forever.

I started working with Concern Worldwide (UK) in February 2020 as part of their Major Donor team in their London office. I was fortunate enough to have the chance to visit Concern’s programmes in Northern Lebanon before starting my role in London.

Seeing the fieldwork first hand was a transformative experience, one that made all the difference in my commitment to join Concern’s global movement to end extreme poverty.

However, just a month into my new position, the Covid-19 pandemic worsened in the UK forcing us all to lockdown and work from home. Being Lebanese and having grown up in Beirut, I flew back to work from there.

A few months went by and as my work as a fundraiser continued I could see how vital it is to raise funds for Concern to deliver life-changing programmes. However, on 4 August, my life as I knew it changed forever. 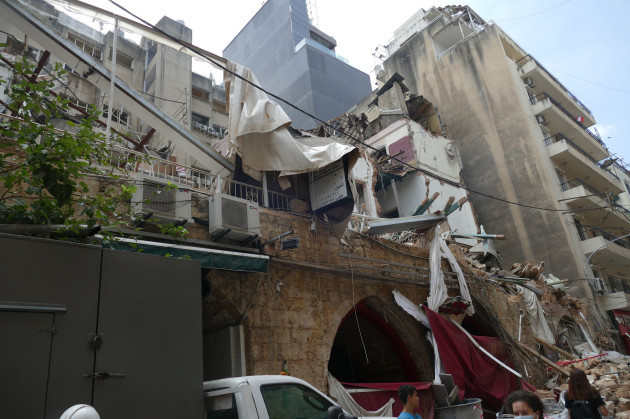 My family and I were caught up in the world’s biggest non-nuclear blast ever recorded. I am grateful to be at my desk today, as many of my friends are in intensive care in hospital and may not live to tell their story.

The day of the blast

I was working with my colleague in a café in Beirut – an ancient city scarred by war, but one that is vibrant, welcoming, and teeming with life. Around 5.40 pm, I ordered an Uber to bring me to meet my father for a sunset drink by the sea.

When we arrived, I tipped the driver (as one does in this city). He smiled, thanked me on behalf of his young ones, and off he went. As I walked towards the sea, I spotted my father.

All of a sudden, I heard the sound of an aircraft rushing towards us -VRRRRRRR – not like a passenger plane flying, but much closer, much faster.

The ground beneath me started to shake and I screamed, “It’s an earthquake!” A woman next to me pulled her daughter from the water and screamed “Its war!”

I heard ‘BOOM’ and fell to the floor as a pink mushroom cloud began spreading above me, eating the city alive. Memories of a double-bomb I barely survived in 2008 resurfaced.

Around me, shattered glass was flying from neighbouring buildings, children were in tears and my father was panicking about my brother’s whereabouts, but all I could think about was my mom, and that this was the end. I could feel it in my gut. An overwhelming feeling of acceptance washed over me, and I said a little prayer.

Now, everyone around me was panicking and I seemed more peaceful in comparison – I picked up my broken phone and sent my mom a voice note thinking that she was away from the blast. “Mom, I’m safe, I’m safe. Are you?”

For 45 minutes, I did not hear from her. I called home, no answer. People around us were terrified, not sure whether to move or stay. There we were, the famously resilient Lebanese people caught in yet another injustice.

Once I was able to connect to the internet and follow the news, it became clear that where I was standing had made the difference between life and death.

Mom finally answered the phone; she was being carried home and a doctor was on his way to attend to her injuries  – small particles of shattered glass under her skin, particularly around her legs, feet and hands because she fell to the floor during the blast – I was not to worry. 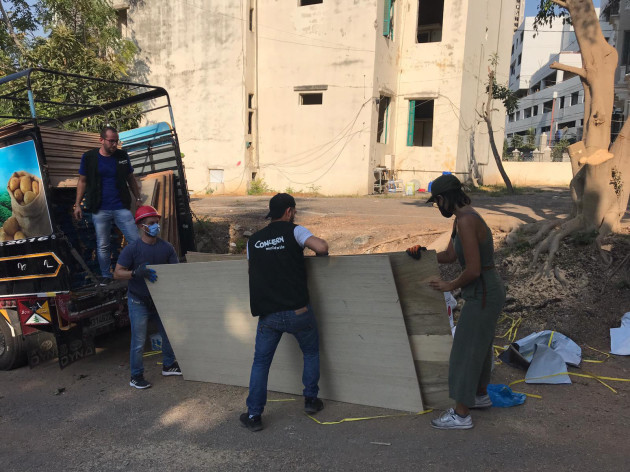 Thankfully, all my family survived and were ok. However, the following day, my mom buried her best friend.

Alive for a reason

Some people say they escaped death, but I feel like it was death that escaped me – and if I am alive today, it is for a reason. As a 29-year-old Lebanese woman, I survived this.

In 2005, while on my way back from a school trip, I survived the blast that brought Lebanon to its knees. In 2006, I survived a war that destroyed my country and fled to neighbouring Syria for shelter.

In the years to follow, I survived a series of bombings and assassinations that killed many people in Lebanon. By working with Concern, I can make a difference to those that have also been affected by tragedies such as this, as well as other humanitarian crises across the world.

Concern is responding to the explosion, distributing shelter and dignity kits to the families affected. It has launched an appeal to raise more money so that we can reach more people.

Being here on the ground, I can tell you that the team in Lebanon haven’t had a moment of rest since the blast, working around the clock to ensure that no home, and no person, is left without essentials. I want to show respect and appreciation for my colleagues in Lebanon.

I may not know the reason I am alive today, but what I do know is that life is short, and it is what you make of the time you have on this earth that really matters.